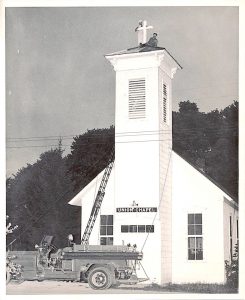 The Catawba Island Volunteer Fire Department practiced its fire fighting skills in 1951 by climbing the Union Chapel with ladder, rope and rigging. The firefighters also took time to paint the bell tower while they were up there.

CATAWBA ISLAND – The Catawba Island Volunteer Fire Department will display a vintage fire engine at the Saturday, May 8 opening of Union Chapel Museum. When the Catawba Museum at Union Chapel opens for its fourth season local history will be on display outside the building as well as inside the 133-year-old former sabbath school and non-denominational house of worship.

Thanks to the Catawba Island Volunteer Fire Department, a 1953 Ward LaFrance fire truck will be parked on the grounds of Union Chapel and available for “hands-on” inspection. It was the first new piece of major fire-fighting equipment purchased by the CIVFD. Their first truck, a used 1929 American LaFrance, was acquired from the City of Toledo.

“We are happy to add a little extra fun to the museum’s opening day,” said Catawba VFD Chief Kevin Gibbons. “Visitors – kids in particular – will be welcome to climb up on the truck to explore. Although the hoses have been removed, original ladders give it the appearance of being ready for action at a moment’s notice. We are currently recruiting new volunteers so we will have a member of the Department there to answer questions and tell stories about how we do our jobs.”

There is a long and close relationship between Catawba’s volunteer firefighters and Union Chapel.

“The first meeting to explore forming the Island’s volunteer fire department was held in the basement of Catawba School in 1949,” recalls long-time resident Don Rhodes, who attended that gathering and subsequently became a six-decade member of the group.

“Even back then the state had rules requiring the rigorous training of a Volunteer Fire Department crew. Union Chapel helped us improve our ladder, rope and rigging skills. They let us practice by climbing up and down from their roof. We could thank them by painting the bell tower and cross while we were up there.”

Upon establishing the department, a social event called “Wives Night” was also organized. It was a gala to honor spouses for supporting the difficult and dangerous efforts of their husbands. Today it takes place annually at the Catawba Island Club, but initially the site varied from year to year. Sometimes the dinner was held at Union Chapel, prepared and served by members of the congregation and other appreciative community volunteers.

Another special occurrence to mark the museum’s 10 a.m. to 4 p.m. opening day will be a brief ceremony at noon with Township Trustees and trustees of the Historical Society commemorating the recent inclusion of Union Chapel on the prestigious National Register of Historic Places.

There is no admission charge to visit the Museum. Its operating cost is principally underwritten by dues to the Historical Society whose yearly membership drive is currently underway. Those who join at the opener will be included in an opening day drawing for a signed print of the Chapel by award-winning watercolor artist Patty Cable Wildman and a guided private group tour.