For ice anglers, it seems like it has been forever since the local ponds and big lakes had ice thick enough to allow fishermen to head out for bluegills or a few yellow perch. An Arctic blast finally arrived in the past week, and while the ice cover wasn’t widespread, the northern section of East Harbor was a hot spot.

On Super Bowl Sunday, a crowd of fishermen and their shanties were all around that stretch of hard water. The bluegill fishing wasn’t quite as good as it had been just before the weekend, but the East Harbor State Park’s Kayak Ramp was a pickup truck parking lot.

So was the tight little road heading to the ramp, as anglers unloaded break-down shanties, ice augers and fishing tackle.

“It’s a chance to get out on the ice for a while,” said Troy Johnson of Tiffin, a salesman at Happy Days Boating in Port Clinton. Along for the long, cold trek was his son, Cole Johnson, a college student and summertime fishing guide at Lakeland Charter Service in Port Clinton.

Most anglers returning to the shore blamed dingy waters from last weekend’s southwest gale force winds for their lack of success.

The fishing conditions and the ice thickness should improve, though. The nightly temperatures are forecast to plummet from the teens this week and should be in the single-digit overnight range heading into the weekend.

Anglers must still take care. Wandering through East Harbor State Park, there is a lot of open water and thin ice on Middle Harbor, and sections of southwest East Harbor. The boat channel leading to East Harbor from Lake Erie is always forbidden waters for ice anglers because the current there makes the ice especially treacherous. 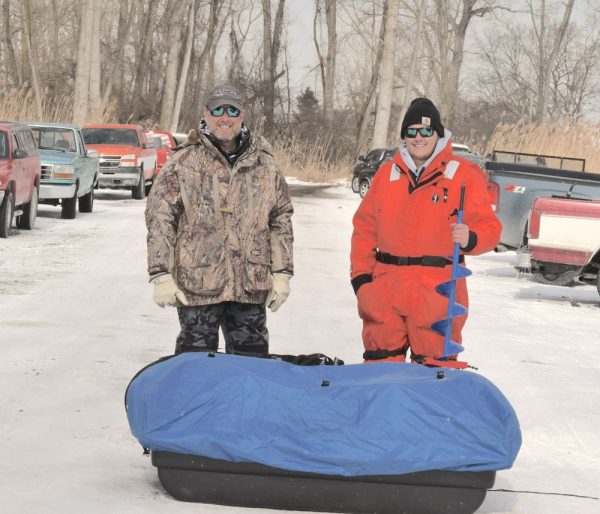 Look for the local inland ponds and small lakes to freeze over this week, but panfish and bass fishermen still must be cautious. Take along a spud bar to test the ice thickness, and don’t set up on ice 4 inches or less in thickness. Take along a pair of spikes — hand-held devices connected by a cord that should be looped around a fisherman’s neck. They will help anglers get a grip on the slippery ice to pull themselves out should they go through.

Fish in pairs, carry a long length of rope to help pull a fellow fishermen out of the frigid water, and dress warm. A float suit or float coat is a good bet.

A few fishermen were spotted roaming the ice off the west side of Catawba Island recently in the Catawba Island State Park area. That is considered risky business for now.

Anglers should remember that the Lake Erie water temperature off Toledo, Sandusky and Cleveland right now is 33 degrees, just a notch above freezing and too risky, should they take a swim.

Also remember that Ohio Division of Wildlife officers have been roaming the East Harbor ice this past week, checking anglers for fishing licenses. While some panfish anglers want a 30-fish limit for bluegills in the name of conservation, wildlife officers are curious if they’ll restrict themselves when the bluegills are biting.

Mark Cahlik of Bay’s Edge Fishing Cleaning in Port Clinton is open all winter, and reported a group of avid bluegill fishermen brought in a catch of the tasty fish that weighed 63 pounds. Bluegills are considered one of the best eating fish around but, like yellow perch, can be a pain in the neck when there are a lot of fish fillets.