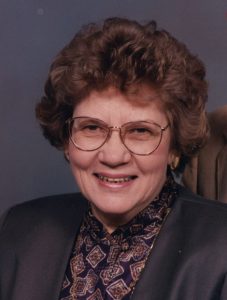 Ardath A. DeGrisky, 93, of Oak Harbor, died Thursday, July 8, at Elmwood Assisted Living, Fremont. She was born May 4, 1928 in Port Clinton to the late Atys “Chappy” and Ardath (Bredbeck) Chapman. Ardath was a 1946 graduate of Port Clinton High School where she was a cheerleader. On April 28, 1951 she was married to Charles DeGrisky Sr., who preceded her in death on Feb. 4. Ardath was a bookkeeper for the Sunoco Station in Oak Harbor, which her husband owned & operated. She also worked 10 years for the Ottawa County Juvenile Court and owned and operated a children’s store in Port Clinton called the “Storkette”. She was a member of St. Paul United Church of Christ, Oak Harbor, where she was a member of the Abend Guild where she served some years as Secretary. Ardath enjoyed her several different “Bridge Clubs” and spending time with her family.