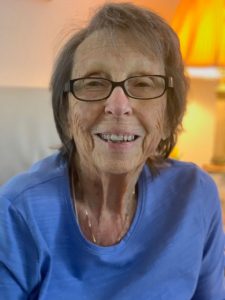 Ardeth Arlene (Farr) Milefchik was born on May 25, 1928 on the family cattle ranch in Newport, Neb. to parents Clifford and Hazel (Dyer) Farr. After graduating as one of the 8 members of the Newport Class of 1945, she attended Commercial Extension in Omaha and graduated with a degree in Complete Business. It was in Omaha that she met her soulmate, Arnold “Arnnie” Milefchik. They married on March 19, 1949 at St. Cecelia’s Cathedral in Omaha. Arnnie and Ardeth lived in Ames, Iowa, while Arnnie finished his bachelor’s degree in Engineering at Iowa State University. They then moved to Kansas City, Mo., where they welcomed children Debra, Chris, and David. Arnnie’s job then took the family to northern Ohio, where they settled in Catawba Island Township. Three more children were born here, Eric, Dan, and Amy. Ardeth and Arnnie built a very loving home where all felt welcome. There was nothing they loved more than a house full of people, and they sure knew how to have fun! They had a foster daughter, Barbara, and also hosted exchange students as well as kids from the inner city. Ardeth had a fantastic singing voice and was a member of the Omaha City Chorus, as well as the Immaculate Conception Church Choir for many years. She and Arnnie were also involved in Playmakers Civic Theater, being granted lifetime membership after involvement in countless plays as both actors and directors. Ardeth also was a great golfer and was involved in the Catawba Island Club Women’s Golf Association. She was a volunteer for the Magruder Hospital Auxiliary and founded the Magruder Hospital Auxiliary Golf Classic. Ardeth and Arnnie both had humble beginnings in the rural Midwest, but their sense of adventure took them on travels all over the world, and she even went ziplining in Costa Rica when she was in her 80’s. Ardeth lived for 92 wonderful years and went home to heaven on Valentine’s Day to be reunited with her husband.

Private family memorial services will be conducted, and interment will take place in Catawba Island Cemetery. A Celebration of Life for Ardeth will be announced at a later date. In lieu of flowers, memorial contributions in memory of Ardeth may be given to the Lupus Foundation of America, 12930 Chippewa Rd., Brecksville, OH 44141, Immaculate Conception Catholic Church, 414 Madison St., Port Clinton, OH 43452 or Playmaker’s Civic Theatre P.O. Box 149, Port Clinton, OH 43452. Gerner-Wolf-Walker Funeral Home & Crematory, Port Clinton is assisting the family with arrangements. Online condolences may be shared with the family at www.walkerfuneralhomes.com.