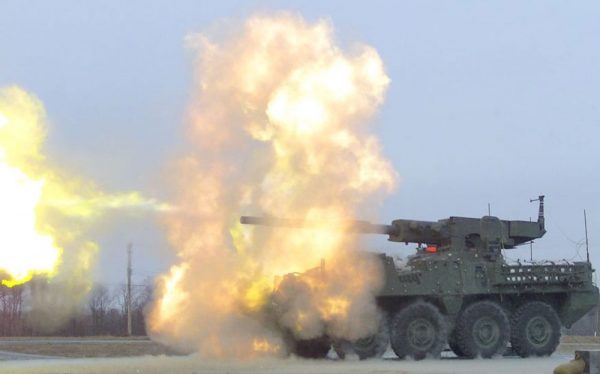 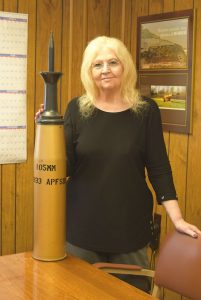 Vice President Ann L. Yamrick of ARES, Inc. shows off one of the 105mm rounds ARES, Inc. shoots out over Lake Erie for when testing cutting-edge military weaponry. (Photo by D’Arcy Patrick Egan)

In military circles, ARES Inc. of Port Clinton is a legendary designer of weaponry, the maker of the M16 rifle hundreds of thousands of U.S. soldiers carried into battle for decades and, more recently, the U.S. Army Stryker 105mm Mobile Gun System that helped American forces in battles in Iraq and Afghanistan.

It all began in Eugene Stoner’s garage on Catawba Island with co-founder Robert Bihun, and this year ARES Inc. is celebrating its 50th anniversary. Herb Roder is now the company’s president. Ann L. Yamrick, who has been with the company since its beginning, is vice president, and there are about 50 workers toiling in non-descript buildings in the Lake Erie Business Park on the west side of Port Clinton.

To truly understand the significance of the 50th anniversary, said Yamrick, one must understand the company’s history. With little formal training, Stoner, who died of cancer in April 1997, designed the M16, which became the M4 carbine, both still the main weaponry used by the U.S. Armed Services today.

While few have visited their facility in Port Clinton, most who live along the Lake Erie shoreline in the Port Clinton area have heard ARES in operation. That’s because they test weapons year round on their range that covers 642 acres of dry land and diked marshland. The massive “booms” emanating from the large-caliber guns can be heard for many miles.

The 105mm gun has a range of about 12 miles, but tosses 33-pound projectiles only about two miles into a special Lake Erie Firing Zone.

“And none of the projectiles are explosive,” said Yamrick. “We have never had an incident over all these years, and take special care to carefully patrol the firing zone when testing to make sure no boats or fishermen are out there.

“While Eugene Stoner didn’t have formal training in the design and manufacture of guns, he was a genius in the area of weapons design,” explained Yamrick. “He spent much of his time talking to machinists, and was a man ahead the the times.”

Yamrick said ARES has been a great company to work for all of these years.

“We’re doing fascinating, important work” for the U.S. military, she said, even today.

“When you watched the news at night to see what’s happening in Iraq or Afghanistan, you would see our Stryker Mobile Gun System. Blogs from soldiers reported they knew when our ‘big, bad bully’ rolled into town, with its large Stryker MGS on a surprisingly small tank.”

The Stryker MGS is designed to fire a potent 105mm projectile, but still light enough to load into C-130 aircraft and parachute into battle.

“We can precisely machine gun barrels, and make them to last four times longer than a regular production barrel,” she said. Yamrick, won’t talk about ARES design work, which is top secret.

ARES has a new neighbor, with LEWCO moving into the Lake Erie Business Park in the past year. Both companies have the same problem, a lack of skilled tradesmen.

“We’re desperate for machinists and electronics experts,” said Yamrick. “With better tools and technology, we need people willing to learn the skills. We’ll pay for four years of college to train them, as well.”