Art is alive and well at Ferguson Gallery in Marblehead 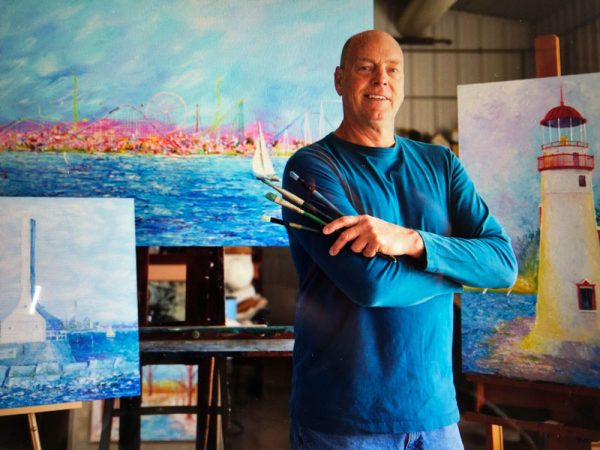 With bold strokes and a freedom of movement, artist Cary Ferguson will feature his artwork this summer at Ferguson Gallery in Marblehead to help celebrate the 200th anniversary of the Marblehead Lighthouse. 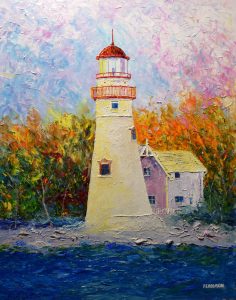 The uniqueness and the beauty of the Lake Erie shoreline, and its many lighthouses, have long been a fascination for noted artist Cary Ferguson of the Ferguson Gallery in Marblehead.

The Ferguson Gallery has become a destination for a legion of visitors, and so has the iconic Village of Marblehead and the wonderful Marblehead Lighthouse celebrating its 200th anniversary during this special summer.

“I’ve been especially lucky to have settled here, and been able to create our 8,000-square foot studio and gallery that is the largest in the area,” said Ferguson. “When I moved here from the Cleveland area, where I was well known as a master glass artist for 23 years, many of our fans began to make the pilgrimage to this Lake Erie area throughout the year.”

Many wanted to purchase one of Ferguson’s exceptional glass Christmas ornaments, which were uniquely done each year for more than three decades. Many kept their collections alive with a new ornament each Christmas season, or purchased them for family and friends.

“This year’s ornament will be celebrating the Marblehead Lighthouse, and with the many events happening this summer, I may have to make more ornaments than usual because of the demand,” said Ferguson, who is in his 45th year in business — and with a new direction.

“After living, boating and fishing on the Marblehead Peninsula and around the Lake Erie Islands for 23 years, I’ve developed such a love for this area, from the physical features of the landscape to the wind and water and to what we call ‘island life’ in this unique part of the world,” he said. “Being an artist dealing in glass, I’ve slowly developed a passion for painting in oils.

“My original artwork in oils has become popular, and I’ve realized that a pallet knife to create exeptional artwork is a wonderful thing. As a result, the Ferguson Gallery is thriving and we’ll be having events all summer long.” 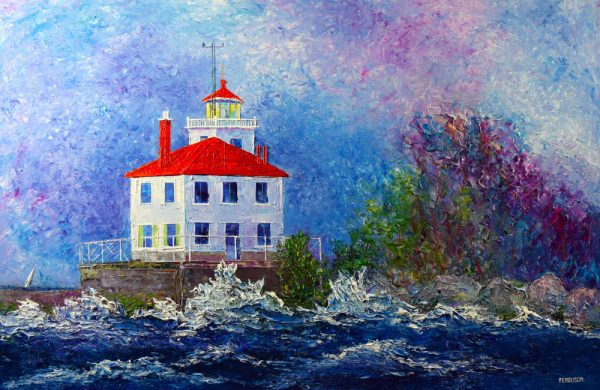 “When I first moved here, the Vacationland area was growing slowly. It was much like watching a kid growing up, and we enjoyed that pace of life,” said Ferguson. “As the shops, the restaurants and entertainment venues continued to grow, as Port Clinton blossomed and Put-in-Bay became so popular, everyone seems to want to come here.

“It’s becoming like the big destinations on the East Coast, but few areas in the country can match our beauty, our big lake and all we have to offer.”

Thinking outside of the box, Ferguson had an idea in recent years to challenge himself with painting in oils, and immersed himself in his new adventure, starting with plein air painting in the great outdoors. Because of his life-long glass work, that began to show up in his oil paintings and his talent with a pallet knife.

Ferguson said this year’s Christmas ornament will come out in November, but cautions visitors to stop soon to purchase one because of the significance of this year’s 200th anniversary celebrations at the Marblehead Lighthouse, which the ornaments commemorate.

“They’re already in demand, and I’ve had to keep my nose to the grindstone to produce them,” he said. “I’m sure we’ll run out of them long before the Christmas season.”