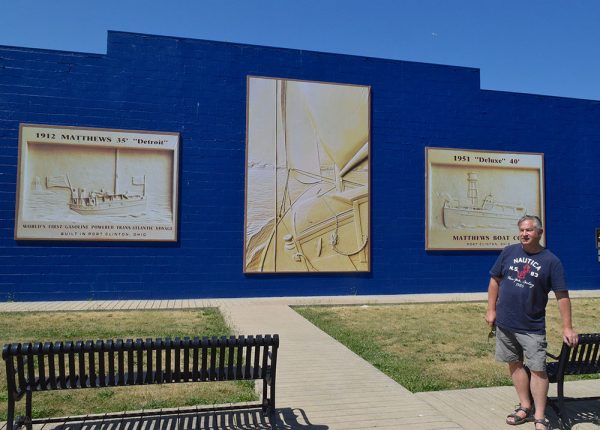 The venerable Matthews Boats, which were once manufactured in Port Clinton, have been captured by local artist and sign painter Jerry Davenport of Catawba Island, and are now featured at Friendship Park in downtown Port Clinton.

A trio of bas-relief works of art were hung on the bold, blue wall of Friendship Park by Davenport recently. The two Matthews boats featured are the 1912 35-foot motor yacht “Detroit,” the first gasoline-powered trans-Atlantic motor yacht, and the 1951 40-foot “Deluxe.”

The “Detroit” toured Europe, even making a stop at St. Petersburg, Russia. The Matthews Boats were known for their seaworthiness and technology, and were popular around the Great Lakes. The Matthews Boat Yard was at the end of West 2nd Street in Port Clinton, on the south side of the Portage River. It closed in 1975.

A French term from the Italian basso-relievo (“low relif”), bas-relief is a sculpture technique in which figures and/or other design elements are just barely more prominent than the overall flat background.

Davenport, a noted local sign painter since 1976, created the works of art 20 years ago with photos and information from Scott Reynolds of the Matthews Boat Company, which started in 1890.

“The art is displayed on weather-proof canvas, with the largest one about 16.5 feet tall and 10 feet wide,” said Davenport. “It was originally carved in high-density, hard-compressed urethane foam, much like wood carving.”