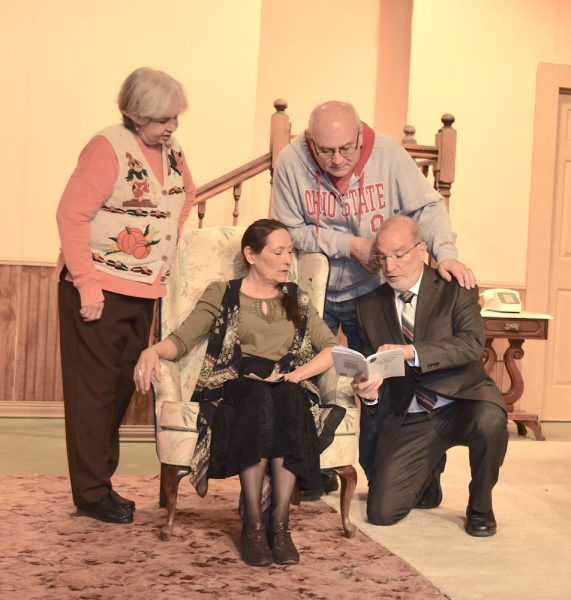 Director Steve Filmore, wearing The Ohio State University jersey, counsels the cast recently in the local production of “Those Crazy Ladies In the House on the Corner” at the Playmakers Civic Theatre. (Photo by D’Arcy Patrick Egan)

The Greater Port Clinton Area Arts Council and Playmakers Civic Theater will host a collaborative series of theater workshops and performances open to all this year in Ottawa County.

“3-2-1 You’re On!” is a series of six workshops ranging from how to audition to costuming the character — and all the bits in between — to make a show, as well as two performances by The Toledo Repertoire Theater and members of Playmakers Civic Theater.

The theater workshops, dates and locations are:

Fees are $10 per workshop for adults and free to students. Tickets to the performances to be announced at a later date. All net profit will be split between The GPCAAC and Playmakers.

The performance series will culminate in the Playmakers Civic Theater hosting The Rep’s production of “Side by Side by Sondheim” on Saturday, Aug. 27 at 7:30 p.m.

This is the first of its kind collaboration between The Repertoire and Playmakers, which will provide front-of-house services, black-box staging, lighting and sound support. The Rep will provide props, musical accompaniment, the cast, crew and direction.

If you only see one Sondheim play in your lifetime, then see the very best doing “Side by Side by Sondheim.”

The final piece of the puzzle is a performance by Playmakers of “Broadway’s my Beat” on Wednesday, Oct. 19 at 7:30 p.m. at Playmakers Civic Theater, 604 West Sixth St., Port Clinton.

Broadway will be produced by Stacy Maple and Greg Peiffer, and directed by Douglas Braun. WPCR Radio will sponsor the live studio show in a traditional style with sound actors gathered around a microphone, in front of a live audience.

To learn more and purchase tickets, please visit pcplaymakers.org for more information. Sponsorships are available for one or more sponsors or grants for each series.