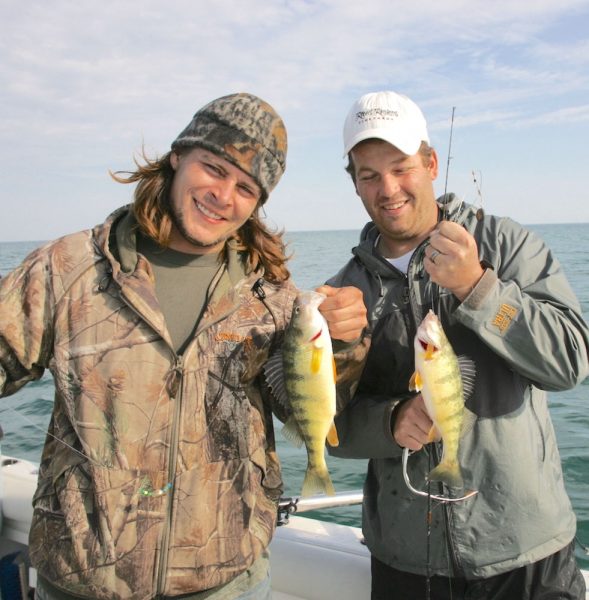 Lake Erie fishing has been a real treat in recent days. In fact, it is easy to say it has been best week of fishing we have had in weeks. Whether you were jigging, casting or trolling, it was truly a great fall week of fishing — and catching!

Let’s start with the walleye. Casters had a fantastic week just like the good, old days of 1980s Lake Erie angling excitement. Jeff Heline of Double D Guide Service was out casting this week and hooked up with a fabulous limit of walleye from north of Kelleys Island while probing the rocks.

Most of the walleye that are being caught while in a drift-and-cast mode have been around the Lake Erie Islands and east of Kelleys Island.

Trollers have consistently been getting nice catches from the Huron dumping grounds to the Vermillion dumping grounds. Normally using Tru-Trip Deep Divers and a spoon is something that you see more in the summer months than in the fall, but that combo in windy, rough waters did very well this past week.

The Tru-Trip Deep Divers were set back 75 to 80 feet behind the boat at trolling speeds of 2.0-2.2 miles per hour were best.

The yellow perch fishing was probably the best it has been all year. Many anglers looking to get a little Lake Erie yellow perch have been anchoring off of the Marblehead Lighthouse and Lakeside Peninsula in 22 feet of water. The most consistent fishing has been west of Port Clinton, including Clinton Reef all the way west to Crane Creek Reef.

The magic depths of water have been 20 to 22 feet of water. Given your location at the time, some spots have given up boxes of perch that are a very nice grade of bigger perch.

I went out fishing Sunday with seven guys and we had our limit of 210 perch by early afternoon in the Crane Creek Reef area. With the weather being so up and down lately, we have actually had a good start to the fall fishing season, especially with the walleye.

I had the pleasure of taking Bruce Deshano and his son Nick out fishing. They own the Off Shore Tackle Company, and are the makers of little planer boards and tackle. We filmed a Midwest Outdoors television show with them and they were very impressed with our area and the Lake Erie fishing.

It has been a great year of bringing people from all over the United States to our area to go fishing, which in the end helps all businesses to succeed. So until next week, get out there and fish!