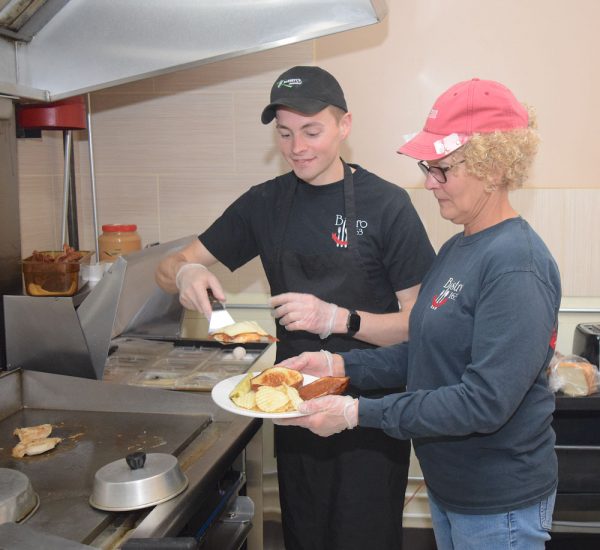 Bistro 163, Ottawa County’s award-winning non-profit pay-it-forward restaurant that has provided thousands of free nutritious meals each year made possible through tremendous public support, turns 5-years-old on Sunday, June 6. Its birthday will be celebrated with a community party at the restaurant on Monday, June 7, from noon to 3 p.m. that will be open to the public.

General Manager Babs Klacik said complementary appetizers and desserts will be served inside the restaurant and is urging the community to join in the celebration. Bistro 163 is located in Port Clinton’s Sutton Center at 1848 Perry Street. She said visitors will have an opportunity to socialize and to also meet Bistro 163 volunteers, staff, and board members.

“It has been an amazing five years for Bistro 163,” said Board President Ed Carlson. “It all started with a question: ‘How would you like to start a non-profit restaurant?’  So many people stepped forward when we answered ‘Yes,’ and the community has continued to support us.”

Carlson pointed out that “volunteers, customers, donors, and staff have given so much to help carry out our mission, which is to increase food security and offer all neighbors a place to eat and come together as one community.  It has truly been a community-wide effort. We thank you all.”

When the coronavirus pandemic hit in March 2020, Gov. Mike DeWine ordered restaurants and other businesses to close. The Bistro’s general manager and her staff of volunteers gathered Wednesday through Saturday from mid-March through July to prepare “take-out-style” meals to be picked up or delivered to people at home.

Bistro 163 believed the greatest need was to provide free dinners through the summer months. In those four and one-half months, a total of 22,294 free dinners were served. The staff also prepared community dinners and holiday dinners from August through December 2020, an additional 2,036 meals.

Bistro 163 is one of 50 such Community Cafes throughout the country. This model addresses hunger issues in a dignified manner while providing an avenue for building relationships.

The name “Bistro 163” was selected to communicate the “farm to table approach,” serving fresh food prepared from scratch using locally grown ingredients whenever possible. Its location on Perry Street in Port Clinton is part of State Route 163, which stretches from Oak Harbor to Marblehead, the restaurants’ target service area of Ottawa County.

Everyone is welcome to eat a meal at Bistro 163. Patrons are encouraged to pay more than suggested menu price to help others enjoy a meal. Those unable to pay may volunteer one hour to help out at the restaurant. No one is turned away if they cannot pay.

Earlier this year Bistro 163 expand its reach throughout Ottawa County. Twice a month, on the second and fourth Mondays, it prepares a free community take-out dinner from 4 to 6 p.m., and offers free delivery to those who need it. Lunch is served Tuesday through Saturday, from 11 a.m. to 2 p.m.

Bistro 163 has received several coveted awards in its 5-year history. In 2018, it was awarded a 5-Star Rating by Toledo Blade food critics. In 2016, 2017, 2018 and 2019 it won top awards in the Beacon’s annual “Best of the Best” contest. In 2019 it was honored for its community service in a Proclamation from Mayor Michael Snider.