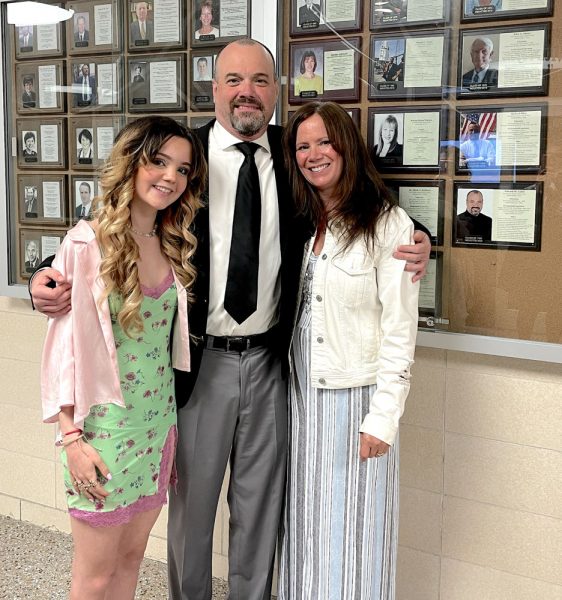 The newest member of the Port Clinton High School Alumni Hall of Fame, Ed Gabel is joined by his daughter, Gabriella, and wife, Mimi (Krupp) Gabel, also a graduate of Port Clinton.

Gabel is a 1982 graduate of Port Clinton High School. His artistic ability was recognized as early as third grade by Sister Lucille at Immaculate Conception School in Port Clinton. He continued to develop his skills into high school, where art teacher Jeanie Radloff taught, encouraged, and inspired him during three years of art classes.

Gabel made his mark at Port Clinton by creating illustrations for the Revista yearbook.

Gabel went on to Miami University in Oxford, Ohio, earning a bachelor’s degree in Marketing in 1986. He parlayed his portfolio of artwork from the campus newspaper to become a staff artist for the Asbury Park Press and the Toledo Blade. In 1997, his illustrations for the Asbury Park Press won awards from the Society of Newspaper Design, attracting the attention of Time magazine. 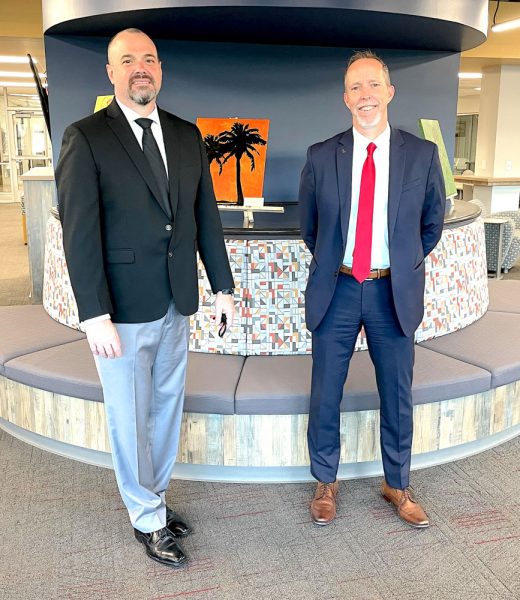 Gabel joined Time Magazine at its Rockefeller Center headquarters in New York City, and his art reached national and international audiences. He won awards from the Society of Publication Designers and the Best in Show award at Malofiej, an international competition for information graphics held in Spain. He was frequently asked to create cover illustrations for Time Magazine, placing him among an elite group of artists to have achieved that honor. To date, he has illustrated the magazine’s cover more than a dozen times.

As Time’s Associate Graphics Director, Gabel also illustrated many of the magazine’s full-spread graphics, including the Sept. 11, 2001 special edition of Time, where his assignment was to diagram the paths of the airplanes that struck the World Trade Center towers to help the world better comprehend what had taken place.

Gabel left Time after 10 years to become Vice President at Joe Zeff Design, a design studio run by Time’s former Graphics Director. In addition to magazine covers for Time, ESPN, Rolling Stone, and even Time rival Newsweek, Ed created artwork for corporations, universities and entertainment companies. He created the album artwork for “Watch the Throne,” the platinum-selling album of Jay-Z and Kanye West; the marquee artwork for “Sister Act,” a Broadway play; and many of the highly publicized apps to first appear on the iPad.

Gabel and a colleague formed Brobel Design in 2014, a design studio located in Westfield, N.J. He continues to illustrate covers for national magazines including Time, and also animates Time’s covers for social media. Ed’s artwork has been viewed around the world, being used by Amazon, Major League Baseball, the National Hockey League, ESPN, DC Comics and the Wall Street Journal, among others. 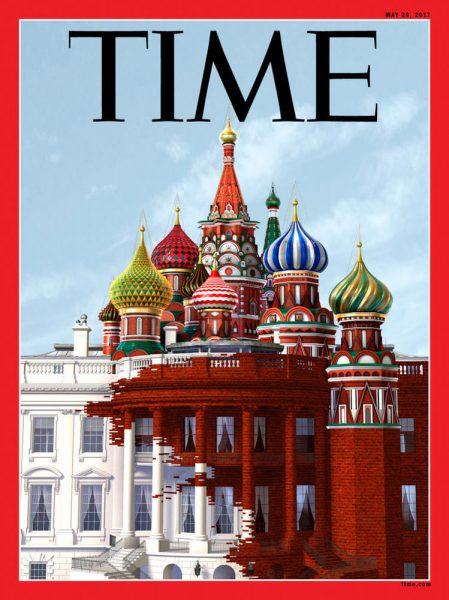 An award-winning Time Magazine cover created by Ed Gabel for the May 29, 2017 magazine. He has produced more than a dozen Time covers.

As our world is always changing, he has adapted his art for new and exciting platforms. He now produces virtual reality experiences for mobile phone users including a Batman experience for Snapchat used by over 19 million users. He has visited and lectured students in China about his process creating graphics.

Visit his website, edgabel.com to see his vast talent.

Gabel lives in Cranford, N.J, with his wife, Mimi (Krupp), and their daughter, Gabriella. He said he owes them both a great deal of thanks for their constant support, especially when a breaking news story at Time would often have him working until dawn.

He credits his achievements to the encouragement from his mother and father to pursue a career in art, as well as his teachers at Immaculate Conception, Port Clinton Junior High School and, of course, Port Clinton High School.

Learn more about the PCHS Alumni Hall of Fame including inductees information and nomination forms at www.pccsd.net.