Dianne Rozak of Danbury Township has graciously shared some of her outstanding photographs of bald eagles that she had taken around Ottawa Country, where nesting eagles have been dazzling bird watchers visiting from around the country. Rozak will give a guided tour of some of her birding hot spots on a Warbler Walk at Meadowbrook Marsh, 8577 E. Bayshore Rd., Marblehead, Ohio on Saturday, May 14 at 11 a.m. Wear waterproof boots and bring binoculars or cameras. For more information, contact Rozak at 419-340-9359 or dianne@danburytownship.com.

Mark Shieldcastle has had a fascination with bald eagles for almost four decades. Even he is amazed at the the stately bird’s rapid recovery along the Lake Erie shoreline, and all around Ohio.

“Eagles were a large part of what I had managed for the Ohio Division of Wildlife for 32 years, and what I still work with as Research Director for the Black Swamp Bird Observatory (BSBO),” said Shieldcastle. “I’m so close to that bird, know it so intimately, and fascinated by its behavior.” 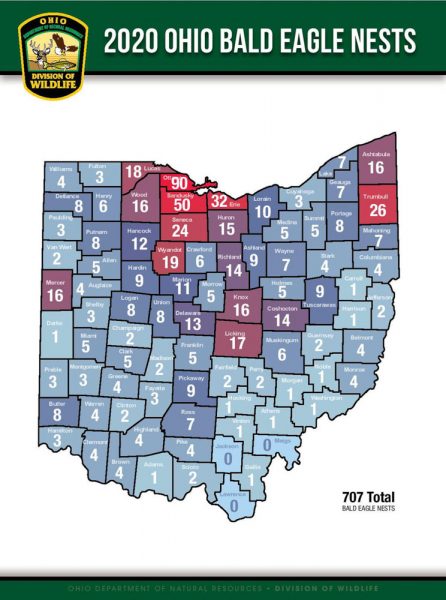 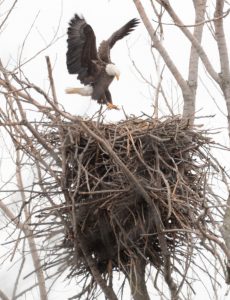 Shieldcastle is known as the “Eagle Dude” at BSBO, which hosts the Biggest Week in American Birding on May 6-15 in Northwest Ohio. Even he is amazed at how quickly Ohio’s eagle population has soared from just four nests in the late 1970s to 806 eagle nests around Ohio in 2021.

I first met Shieldcastle in the muck and mire of a wetlands in Ottawa County in 1979 in order to write my first eagle story as Outdoors Editor for The Cleveland Plain Dealer in Cleveland, Ohio. The 20-year goal of the state wildlife agency then was to have 20 eagle nests around Ohio by the year 2000.

“We topped that goal in 1992, so we revised our goal to 36 nests by 2000. The eagle comeback was much, much faster than I could have ever dreamed,” said Shieldcastle. “We discovered they were more than willing to live among humans, and build their mammoth nests in habitat no one thought they would use.”

Like a short distance from the Camp Perry trap and skeet range, and surprisingly close to the Griffing Sandusky Airport.

The reason the majestic birds disappeared in the region was the use of pesticides, which killed the plentiful mosquitoes of the Northwest Ohio marshes. But the chemicals also made the shells of eagle eggs so thin they couldn’t hatch. Rachel Carson’s best seller, “Silent Spring,” documented the toxic results of DDT, and provoked the creation of the Endangered Species Act.

As a result, bald eagle nesting success was at an estimated rate of 82 percent in the spring of 2021. The average nest hatched 1.6 young, well above the number needed to sustain the population. 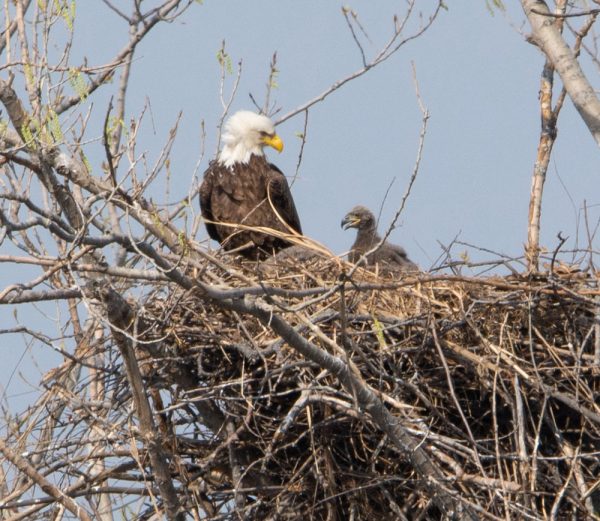 While birders love spotting colorful warblers and other migrating songbirds birds at this time of year, driving the Biggest Week in American Birding on May 6-15, the Lake Erie marshland has eagles — 90 nests documented last year in Ottawa County alone to lead the state — and they hang around all year because of the plethora of fish and small mammals to feast on.

Like Shieldcastle, so many of us who live in the region can’t help but stop and watch the huge birds as they hunt for food, perform their mating flights, perch on limbs high above the ground or feed the eaglets in their nests. 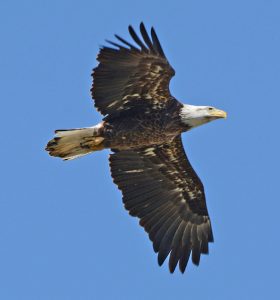 “It was Laurel Van Camp, an Ottawa County Wildlife Officer, who first sounded the alarm that eagles were not reproducing, and made the first eagle estimates in 1959,” said Shieldcastle. “That began the recovery effort. We put transmitters on eagles to determine the best habitat, and what they would tolerate.”

Radio transmitters are still in use. As Eagles expanded their Ohio range, biologists discovered those Lake Erie shoreline eagles began to travel and nest downstate, but still returned to feed in the Lake Erie marshes.

As the wetlands have expanded around Northwest Ohio, so have the chances to see more exotic species of birds. The BSBO is headquartered in the Magee Marsh Wildlife Area on the Lake Erie shoreline, and at this time of year bird watching fans have the chance to see trumpeter and tundra swans, a wide range of waterfowl, sandhill cranes and even white pelicans, which have established a nest-hold in western Lake Erie for the first time.

Eagles will always be a head-turner, though, even though they’ve become almost common in our own back yards.