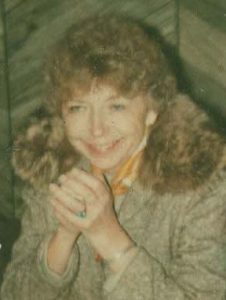 Barbara had varied vocations from the time she graduated from high school. She was the office and sometimes drove a dump truck with small boys next to her for Del’s Service in North Olmsted. She was co-owner of Limpert’s Marina on the lake side of Danbury peninsula. She was a real estate agent, and a Victims’ Advocate with the United Way of Greater Toledo Domestic Violence Court Advocacy Program, among other jobs.

Barbara converted from Lutheran to Catholicism and was a member of Immaculate Conception Church of Port Clinton where she was active as a lector, part of the Charismatic Prayer Group, parish council, parish mission team, and held Bible study in her home. As a lay Associate of the Sisters of Charity of St. Augustine (CSA), Barbara helped determine how to restructure the management of the hospitals and services owned by the Sisters.

Social Justice was very important to her. She participated as a facilitator in the Victim Offender Dialog Program of the Ohio Office of Victim Services of the Ohio Department of Rehabilitation and Correction. She was an Adult Basic Literacy Education (ABLE) tutor. Barbara served Ottawa County as a Court Appointed Special Advocate (CASA) volunteer. Barbara was designated an Amicus Curiae (friend of the court who assists a court by offering information, expertise, or insight that has a bearing on the issues in the case) for the Ottawa County Common Pleas Court. Barbara received the Key to the City of Port Clinton from Mayor Tom Brown.

In 1998, at age 71, Barbara traveled to Russia as part of a cultural exchange program through Bowling Green University. She would bravely adventure on her own after the death of her husband in 1988.

Barbara was a spinner, natural dyer, and weaver who raised sheep. She belonged to a guild and also demonstrated natural dying of fibers and weaving at Cedar Point when Frontier Trail was first opened. She developed a presentation about the meaning of Psalms 23 from a shepherd’s understanding.

Before moving to Danbury Township, she and her husband were active in government, civic, social, and community service organizations in North Olmsted. Many family and friends fondly recall times on the south side of Sandusky Bay at a cluster of cabins called Springbrook Association. Later, The Anchorage served as a gathering place for family reunions and celebrations.