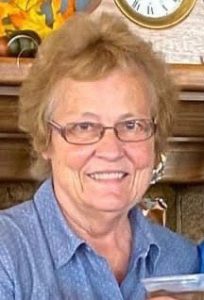 It is with shock and great sorrow that the family of Barb Chrysler announces her death on Monday, Feb. 14, at the age of 69. She passed away following a brief stay at Otterbein Rehab Center in Marblehead. Barb was born on March 23, 1952, in Cumberland, Md., the daughter of Leroy and Frances Lehman. Her family moved to the Cleveland area where Barb graduated from Lakewood High School. She attended Ohio University. Raised with three brothers, Barb quickly learned to hold her own and fend for herself.

Barb moved to the Island in 1980. At Put-in-Bay, her first job was renting bicycles at the Boathouse bike rental. During many ice fishing seasons, she transported hundreds of fishermen from the Put-in-Bay Airport to frozen Lake Erie where they were shuttled to their rented ice shanties. In those days, communications were by CB radio and her handle was “Tug Slave.” In the early 1980’s, Barb became the executive secretary of the Put-in-Bay Chamber of Commerce when the office was in the old bathhouse in DeRivera Park. She served as the Clerk of Put-in-Bay Township for a time during the 1980’s. In 1993, shortly after the Perry Holiday was built, she was hired as manager. When the hotel was sold, she remained in her position for the Niese family. She also waitressed at Tipper’s in the winter months when needed.

In 2012, Barb became the manager of the Put-in-Bay Yacht Club, retiring in 2020. She was awarded the Inter-Lake Yachting Association’s 2020 Commodore Award for her years of commitment and dedication. After she retired, she enjoyed a part-time job at the Candy Bar in downtown Put-in-Bay.

Barb’s signature drink was her famous rum and Coke. It had to be Coke. Not Pepsi. It had to be “Bacardi!” — not any other kind of rum. And we all knew it! She was renowned for her hospitality at her Perdido Key condo where she wintered in Florida. Countless guests enjoyed her delicious crab cakes and elegant appetizers. An expert tour guide, she was happiest exploring new places and then sharing the places she found.

Barb lived on the west shore at Put-in-Bay. She was an avid bird watcher and took great pleasure in feeding birds and deer from the woods surrounding her home. She adopted and cared for stray and feral cats, providing shelter, nourishment, love and veterinary care. Barb took part in the island’s annual Audubon Christmas Bird Count.

Island friends were thrilled to receive tins of her homemade toffee at Christmas time. She belonged to the Put-in-Bay Garden Club and coordinated one of the group’s initial garden tour and luncheon events at the Doller House. Many will remember Irish Ghosts at the Crew’s Nest where Barb’s name was written by friends on the bottom of a barstool, her love of every new gadget and her ability to figure them out, and her notorious list of Cosmo rules from Perdido Key. She lived her life on her terms — from bungee jumping in Florida to touring Europe on a bicycle. She shopped in the Grand Bazaar in Istanbul, traced the footsteps of the Beatles for a week in Liverpool, toured the Big Apple, and walked the Golden Gate Bridge in San Francisco. She especially loved road trips and more often than not took the road less traveled.

Barb bravely battled breast cancer and was proud to be a 24-year survivor. She supported and encouraged others who had been diagnosed. She actively participated in the annual Susan B. Komen Race for the Cure in Toledo nearly every year since her diagnosis. “Don’t be the victim, don’t whine, drink lots of water, shut up, and go mow the lawn,” were her words of advice to one island friend. Barb’s kindness continued after her death through an organ and tissue donation.

Barb, you touched so many lives in so many ways…Our memories of you – your outrageous humor, boundless energy, your kindness, your spunk, and especially your friendship – will be treasured forever.

Memorial donations to fund a special bird feeder at the Nature Center may be made in Barb’s name to: Lake Erie Islands Nature and Wildlife Center, c/o Wild Bird Feeding Program, PO Box 871, Put-in-Bay, Ohio 43456. Memorials may also be made to Island Safe Harbor Animal Sanctuary, 3620 E. State Street Port Clinton, Ohio 43452. A Celebration of Life will take place at the Put-in-Bay Yacht Club on Saturday, May 21, from 2 to 6 p.m.