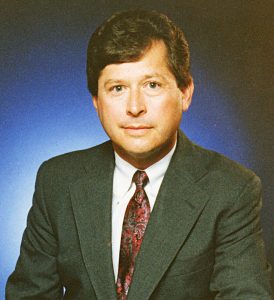 On July 28 Barry A. Hofer was called home to our Lord after a long and courageous battle with dementia and related illnesses. Born on May 4, 1946, in Akron, to Albert C. and Helen G. Hofer, Barry moved to Findlay at a young age. He graduated from Findlay High School and later attended the University of Akron. During his time at Akron University, Barry’s accomplishments and successes included his membership in Phi Kappa Tau fraternity, Chairman of the Senior Class Board, and the University “A” Key for campus involvement. After graduation, he served on the University Alumni Council as well as the Chapter Board of Directors for Phi Kappa Tau.

From 1969 to 1972, Barry taught political science to college bound seniors at Stow High School and was recognized as the top social studies teacher in 1972. Shortly thereafter, Barry became a successful life insurance agent for American General Life, receiving many industry awards and giving keynote speeches during many different conventions. In 1980, Barry formed his own company, and quickly earned recognition as a leading group insurance marketing company in the Akron area. Over the next twenty years, Barry was recognized with leadership positions in the insurance industry, service on board positions for underwriters, and was the leading producer for many insurance companies. He sold his successful business in 2001. By 2005, despite an active and enjoyable retirement, Barry founded Group Insurance Specialists and began marketing group insurance to mid-sized companies. He again established himself as a premier insurance salesman and was actively involved with the Port Clinton Chamber of Commerce, Ottawa County Improvement Corporation, Ohio Lake Front Group and served on the Advisory Council for Anthem Blue Cross. After many years of success, Barry sold that business as well, and returned to his active retirement.

Barry loved life and all it offered. He could often be found on his boat on the Great Lakes (having navigated all five lakes…twice) searching for that elusive next big catch. When he was not fishing or hunting, he would be travelling the world with family and friends. No matter where he found himself, Barry was always quick to make new friends. He loved to entertain family and friends at his house, and all were welcomed by a gracious and generous spirit.

Barry is survived by his beloved wife, Lynda (Gallina) Hofer and his younger sister, Diana, many nephews and nieces, and his two precious Rag Doll cats, Taz and Beanie. He will be greatly missed by everyone who was fortunate enough to have met him.

You are invited to view Barry’s tribute wall, offer condolences and share memories at www.sharerfuneralhome.com. Arrangements are by the Sharer-Stirling-Skivolocke Funeral Home.