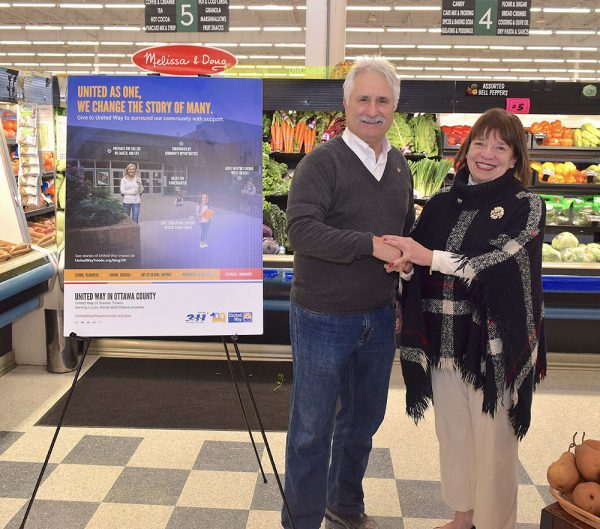 Director Alison Lanza Falls of United Way in Ottawa County accepts a pledge from Mike Bassett and his wife, Debbi, of Bassett’s Market for $10,000, giving this year’s United Way campaign a lot of impetus for its wealth of 2020 programs. (Photo by D’Arcy Egan)

Mike and Debbi Bassett of Bassett’s Markets made sure Director Alison Lanza Falls will find success as she takes over the United Way of Ottawa County, donating $10,000 to the social service agency for 2020 programs and services.

“Where you work and where you make a living is very important to my wife, Debbi, and I,” said Bassett, who recently turned over management of the Bassett’s Markets to his son, Charlie Bassett. “We always want to give back to the community where we’ve be welcomed and have found success.

“Our working together with United Way goes back to the Chris Galvin era, and we miss Chris terribly in Ottawa County. It was Chris Galvin who saw the future of United Way and the other social agencies, pulling all the troops together at the Sutton Center in Port Clinton. We leased the property before even winning the bid, which would not have happened without Chris Galvin,” said Bassett.

“No one had a bigger heart than Chris and United Way. This donation is our way of saying thank you to her, and to the community, and to allow United Way to help more people in the community.”

Chris Galvin retired as director of United Way in January 2019 after 25 years at the helm. After a vacation in Columbia, she took ill and passed away.

“I want to thank Mike Bassett for his leadership in Ottawa County for a long, long time,” said Lanza, of Catawba Island. “The generosity and caring for the people of Ottawa County by you and your family is so amazing. The food security for children that you’ve been helping us with this year is something everyone’s going to be hearing more about.

“The $10,000 donation could not have come at a better time for United Way as we move through this transition, developing leadership for the long term.”

Lanza said food security for children is a very real United Way goal this year, expanding the programs already in place. With help from Bassett’s Markets, more than 180 bags of food were distributed to students in the Port Clinton School District during the recent Christmas break to ensure that youngsters in low-income homes would not go hungry.

“For the upcoming Martin Luther King Day weekend (Jan. 18-20), we’ll work with Bassett’s Markets and other volunteers to expand that to 200 bags of food for kids,” said Lanza. “We’re working to make food security a year-round program.”

Lanza and her staff are also taking charge in the revamping of “United Way 211,” the Local Resource Exchange. United Way wants people to be able to connect with United Way and other local resources by calling “211.”
“We want to make sure we have good data in the system so we get off on the right foot,” said Lanza.