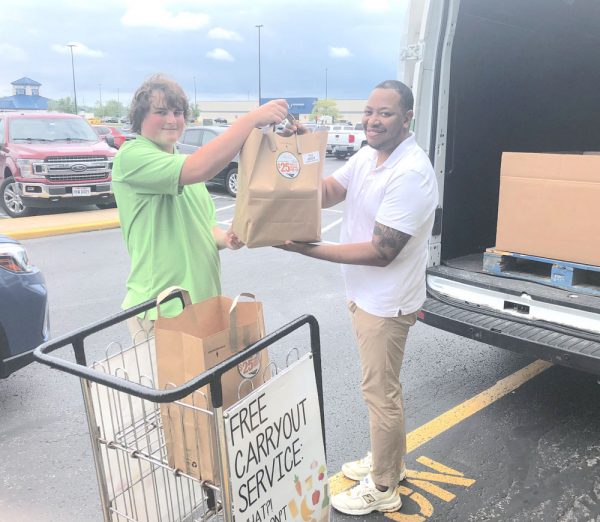 Odin Wyler of Port Clinton, left, of the Bassett’s Market staff carries out a bag of groceries donated by a Port Clinton customer on Friday to Chris Proctor of the Toledo Northwestern Ohio Food Bank. (Photo by D’Arcy Patrick Egan)

“We are very pleased to be the host of this Food Drive to help end hunger in Ottawa County. We have been working with the Toledo Northwestern Ohio Food Bank for several months with all three of our locations in Port Clinton and Bellevue,” said Bassett. “We are grateful to see the commitment of both our customers and employees to make a difference in the lives of our neighbors in Ottawa County.”

James M. Caldwell, President and CEO of the Toledo Northwestern Ohio Food Bank, said they are grateful for the partnership with Bassett’s Markets.

“Bassett and the entire team at Bassett’s Markets have dramatically increased our ability to serve Ottawa County and enhance our mission to end hunger there.”

The Toledo Northwestern Ohio Food Bank parked one of its vehicles in front of the Bassett’s Market. People were invited to bring items to Food Bank personnel stationed at the truck for drop off.

“Hunger is a problem that can be solved and we are glad to be a part of an effort with our friends and neighbors to do just that,” said Bassett. “Our stores have contributed more than 15,000 pounds of food to local food banks over the last year, knowing that 12 percent of county residents are suffering from food insecurity.”

A food bank is a large stepping stone for helping those with food insecurity said Bassett.

“Families can face a cash crunch for a variety of reasons, making paying the bills extremely difficult while comprising being able to put food on the table. The Food Bank is is way to get through those tough times many families face.”

Bassett’s Market provides a bonus for the Toledo Food Bank by filling a grocery bag with nutritious foods, such as raisons, macaroni, rice and breakfast cereal, and perhaps treats like cookies and fruit cups.

“We sell those bags which are loaded with $25 or more in groceries to our customers for $20, so they can donate them to the Toledo Food Bank truck out front, or we can do that when the truck arrives,” said Bassett. “It assures our customers that they’ll donate the groceries needed to the people who need it most.”

Nahmy Bassett, an immigrant from Syria, opened his first small market in Oak Harbor in 1898. His specialties included tobacco, candy, fruit, nuts, and, above all, friendly and courteous service. Bassett’s Market now has three locations, 3994 East Harbor Rd. and 1608 East Perry St., both in Port Clinton, and 228 West Main St. in Bellevue. The stores are now under the care and ownership of the fourth generation of the Bassett Family, with President and CEO Charlie Bassett.