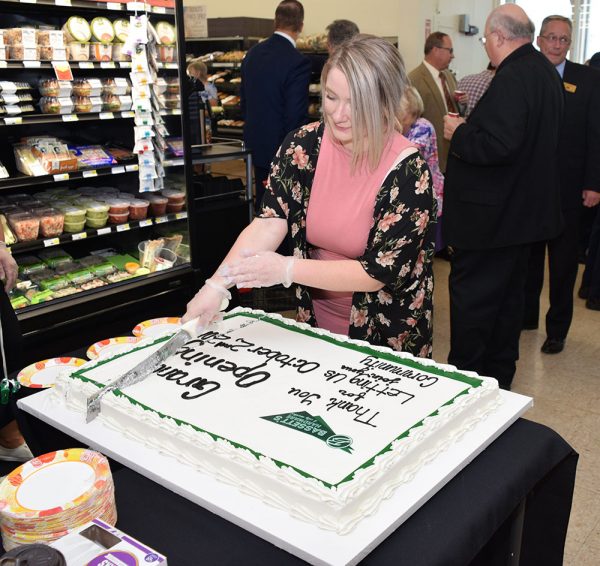 Lindsey Reau, the marketing director for Bassett’s Market, cuts the cake to celebrate the grand opening of the new Bassett City Market.

Charlie Bassett, the president and CEO of Bassett Market, revealed the formula for success in adding a third grocery store to the family chain after he cut the ribbon to celebrate the grand opening of Bassett’s Hardware & City Market.

Bassett’s Market also has grocery stores in the Knollcrest Shopping Plaza in Port Clinton and at 228 W. Main St., Bellevue. The new store at 1608 E. Perry St. is designed to serve the downtown residents of Port Clinton.

“An operation like this does not come together with any one person,” said Bassett. “It takes teams of highly skilled people to make it happen.”

Bassett praised Bob Eaton, a hardware expert, for bringing the plans for the new store together, and store manager Ron Clark, for his merchandising and stocking plans and developing store policies while handling the day to day operations. Bob Carpenter ran the overall project, said Bassett, and made sure each element of the new store was done correctly.

“I need to thank every team member of Bassett’s Market in Bellevue and Port Clinton,” he said. “Without the expertise and hard work of every team member at those stores, this project would not be possible,” said Bassett. “Many of the products that are in this store were prepared by team members at our other stores, under the direction of Tom Mumford in Port Clinton and Mike Kolhoff in Bellevue.”

Bassett said that over the past year he’s had the pleasure of talking with many of the local folks living in Port Clinton.

“At one point, I thought that you all had a Town Hall meeting to practice what to say to us,” Bassett told the crowd at the ribbon cutting for the new store last Wednesday. “The underlying tone of each conversation I had was the same. Port Clinton really needed a grocery again, they said, and they were so glad (the new store) was here.”

Bassett made the crowd smile when he told customers that he now knows what they want, judging by sales transactions over the past year.

“Port Clintonites must lose their keys very often, because making keys was our No. 1 seller. Port Clintonites love Bassett’s Market donuts, which was No. 2. And they love grilling outside, with propane No. 3 on the list.” 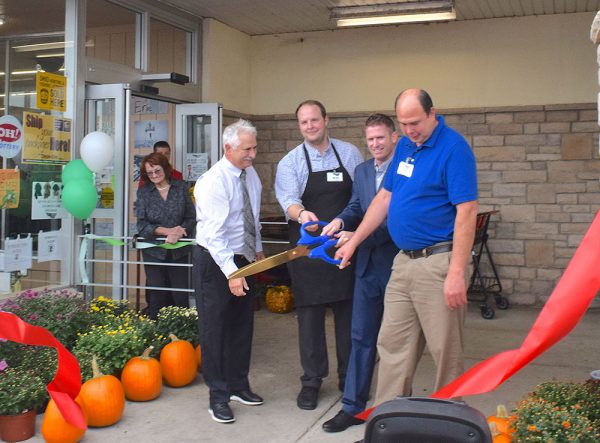