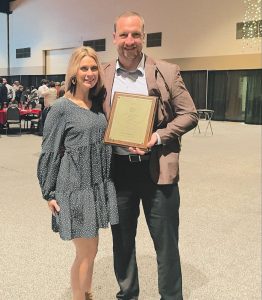 Port Clinton High School Football Coach Beau Carmon and his wife, Ashley, accept the Hall of Fame Coach’s Award from the National Football Foundation at an awards banquet in Toledo.

TOLEDO — It was one last way to be honored for all he and his team accomplished this past season.

Port Clinton coach Beau Carmon was honored by the National Football Foundation for the third time and won the Hall of Fame Coach’s Award for his efforts last season, one that saw the Redskins win the program’s first regional championship.

It was a much-deserved honor for Carmon, who stepped away from his position shortly after the season ended following nine years of coaching the team.

“It’s an honor,” he said. “You feel very special being around so many great coaches, both in high school and college, and being there with your families, it makes the game of football very special.”

The keynote speaker was Ohio State coach Ryan Day, who spoke for about 30 minutes.

“It was a great speech. It was about perseverance and staying the course, and being the best version of yourself. It was about reaching your full potential. It was along those lines, not just in football, but in life,” said Carmon. “It was a great message and it was a really nice banquet.”

Carmon led the ‘Skins to their first regional title with a 49-21 win over reigning state champion Van Wert. For his efforts, Carmon was named The Toledo Blade Coach of the Year.

Port Clinton finished 13-2 and defeated Toledo Scott, 47-0, in the first round, following that up with wins over LaGrange Keystone (44-13) and Perkins (19-14) before upsetting the Cougars.

The ‘Skins’ season ended with a loss to Youngstown Ursuline, 34-17, in the Division IV state semifinals.

Carmon leaves with a 57-41 record and a 6-5 mark in the postseason, plus two Sandusky Bay Conference titles

“The foundation was already there, it’s just been a very long time and people forgot about it. We founded that foundation, and we continued to build on that,” he said. “It’s on the seniors and the returning players to build on it. It doesn’t matter how good of a coach you are, how great of a community you have, you have to have good players.

“We were able to make some things happen, and the rest is history. There are some great things in the future that we can accomplish. I’m sure the program is going to be just fine. I feel real good that our administration will hire someone who is more than qualified to fill the position.”