Beau Carmon steps down after ninth season at the helm 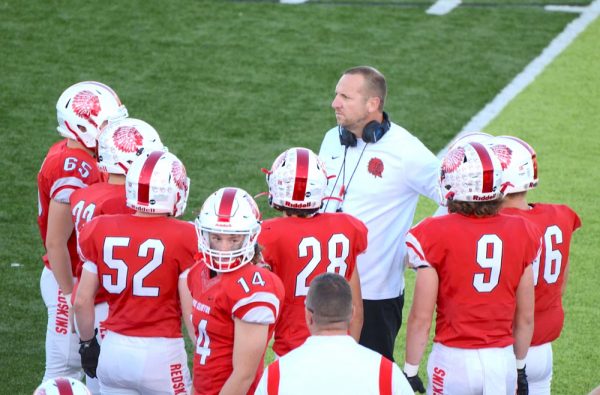 When Beau Carmon took over as the head football coach at Port Clinton High School, the team was coming off a 1-9 season and was riddled with injuries.

But things quickly came together for Port Clinton, and the ‘Skins nearly reached the summit this past season before falling to Youngstown Ursuline, 34-17, in the Division IV state semifinals. The wonderful run was a reward for the time, effort and energy invested by a football program and the community suppporting it.

Carmon led the ‘Skins, behind the efforts of players the likes of Garrett Cornell, Cam Gillum, Josh Hurst and Cashes Jackson, to its first-ever regional title with a 49-21 win over reigning state champion Van Wert just one week before facing the Fighting Irish. For his effort, Carmon was named The Toledo Blade Coach of the Year.

Port Clinton, which was seeded fourth in Region 14, finished 13-2 and defeated Toledo Scott, 47-0, in the first round, following that up with wins over LaGrange Keystone (44-13) and Perkins (19-14) before upsetting the Cougars.

“The playoff run was phenomenal. I was happy for everybody. It was exactly what those kids deserved,” said Carmon. “Seeing the kids’ faces and seeing everyone excited in the community, that’s great. I’m thrilled for that. It’s hard to put into words.”

But following nine seasons coaching the ‘Skins, Carmon decided to step down after dealing with some health issues.

“There is no balance with coaching. If you want to let a leg up on the best programs in the area, there’s no substitute for trying to outwork teams. You win games in the offseason in the weight room and the summer and spring. There are a lot of things other than that,” he said. “The season is a little more taxing than the offseason.

“For the first time this year, I felt like I lost control of being able to manage everything. I never really had a good balance. The football team came first, and my family understood that. I had to deal with some things because I lost control. I don’t want to see that again, to feel that again. It’s what is best for everybody, especially the football team.”

Carmon has had conversations in recent years with Rick Dominick, the athletic director, and Pat Adkins, the superintendent, about his health.

“Midseason, around week five or six, I talked to Pat and told him where I was. He knows that’s how I am. I just wanted to give him an idea,” said Carmon.

“I ended up in the emergency room for a couple days. The nurse checked me out and said you need to go to the hospital, and my wife came and picked me up. It just compiled, so I missed practice, and I don’t miss practice, so it just kind of came to a head. My blood pressure was 213/145.”

He is married to Ashley, who teaches in the Port Clinton School District, and has three children, a daughter and two sons. Now Carmon will have more time to spend with his family.

The turning point for the football program came early in Carmon’s tenure in 2014, his second season at the helm. The ‘Skins went 7-4 and advanced to the playoffs for the first time in program history. The key victories were a 27-19 win over Genoa in week three and a dramatic, 33-30 defeat of Perkins in week seven. (Just one year before, the ‘Skins lost to the Comets, 84-13, and fell to the Pirates, 73-16.)

For Carmon’s efforts that led to an incredible turnaround, he was given the distinction of being named the Division IV Coach of the Year. Port Clinton would lose 49-14 to Kenton, Ashley’s alma mater, in the first round of the playoffs.

“Genoa puts about 82 points on ‘em and we turn around and beat them at their place the next year. I think beating Clyde for the first time in 25 years in 2016 was huge. That was a trademark win for the program when we beat them,” said Carmon.

“Perkins had owned us for so many years, and we beat them in 2014, and also we were the first team to beat them in their new stadium,” said Port Clinton athletic director Rick Dominick. “Perkins had never lost in their new stadium until we had beaten them that night (in 2015). Back in 2016, the first playoff win when we beat Benjamin Logan, and hosting a first playoff game was obviously a big moment.

“All of the playoff moments from this year were tremendous wins. You never underestimate your record against your rival — Oak Harbor — and those were big wins for us. Oak Harbor had owned us for so many years, and for us to have beaten them a few times was huge.”

After having beaten rival Oak Harbor just once since 1987, Carmon’s teams defeated the Rockets three times.

In 2015, the ‘Skins went 7-4 and advanced to the playoffs again, losing in the first round to the Columbus Bishop Hartley Hawks.

The next season saw Port Clinton win the Sandusky Bay Conference for the first time since 1948 when it defeated the Rockets, 28-14, in week 10.

Unfortunately, the ‘Skins, the No. 1 seed in Region 14, saw its season end again at the hands of Bishop Hartley in the regional semifinals, but not before it won and hosted its first playoff game, a 41-28 victory over Bellefontaine Benjamin Logan.

Port Clinton achieved another impressive feat in 2016 when it defeated powerhouse Clyde, 27-21, its first win over the Fliers in 25 years, late in the season.

The next four seasons saw Port Clinton go 20-19. In 2020, the ‘Skins lost to Van Wert in the second round of the playoffs. (Three of Port Clinton’s playoff losses have come to the eventual-state champion.)

Carmon leaves with a 57-41 record and a 6-5 mark in the postseason, including two conference titles. His elite players, athletes like Nathan Stubblefield, Brandon Moore and Russell DeMarco, among others, set or tied 48 school records.

Cornell had two older brothers — Tristen Mallory and Morgan Mallory — who played for Carmon. Tristen played on the 2013 team that failed to win a game but changed the culture, and qualified for the playoffs the next year.

“Going into Tristen’s senior year, I know that summer was one of the hardest-working summers in program history with Coach Carmon leading the way, having his players work their butts off. And that 2014 season changed the program as a whole,” said Cornell.

“From that day on, Coach Carmon knew how he wanted his program to be. Coach Carmon always had a standard on how he wanted his teams to play. Now, the future teams are going to want to be like our 2021 team. He pushed us to limits we didn’t know we could reach. Our main goal was to win the SBC, we weren’t looking at the state final four. I am thankful I had him as our coach and will always remember him as a person.

“Football brought the community together. You could walk into a game on Friday nights and not have a place to sit, and knowing that is a great feeling. If you look at our playoff game this year against Perkins, Port Clinton as a whole pretty much filled up Strobel Field, one of the biggest stadiums in northeast Ohio.”

The work of Carmon, his staff, and the community leaves the program in good shape. A winning culture has been established, and there’s a field house located at 407 Short Street that was recently built and allows for year-round training.

The 26,000-square-foot facility has a turf field, a wrestling room and a weight room that was designed by Port Clinton strength coach Phil Fought, who was also the only assistant to coach under Carmon in his nine years with the team.

“Phil will work with the kids in the offseason program,” said Dominick. “The football program is in good hands.”

Dominick talked about the job Carmon did strengthening and fortifying the foundation of the program, a job that began in 2013 with a team that went 0-10 but set a standard for the underclassmen.

“I’ll go back to the five coaches we had when we last had a winning season in 1990 and between 2014. I know all those guys, I worked with them at Port Clinton — they were good guys, good coaches to get it turned around,” Dominick said. “Beau Carmon is a difference-maker. He came in, he had a plan, he had a vision. He held kids accountable. He had kids hold each other accountable, and the kids bought into it. That 0-10 team had as much to do with our success as anything. They showed the underclassmen, listen to this guy, and you’ll win.”

Carmon, a 1999 Tiffin Columbian graduate, is from Bloomville. He was a star tight end for the Tornadoes before becoming an offensive tackle at Bowling Green State University and then transferring to the University of Findlay, where he got his bachelor’s degree in 2005.

Following his playing days, Carmon coached at Riverdale High School, located 13 miles southeast of Findlay, for two years and was an assistant at Fostoria for two years before taking the reins with the Redmen, a role he held for three years. He left Fostoria and was the defensive coordinator for Tiffin Calvert for one year before going to Port Clinton.