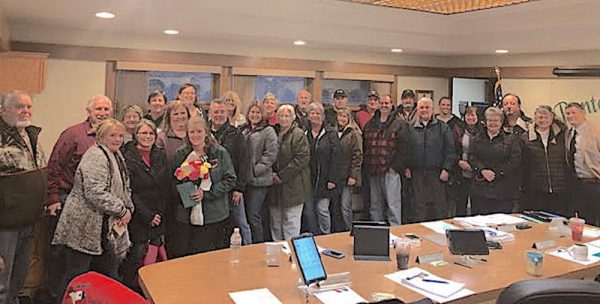 Jeannie Behnken was presented a bouquet of flowers by the B-C-S Transportation Department, family and friends after being named as the Transportation Director of the Year in Ohio.

The award was announced by Supt. Guy Parmigian, who said Behnken “transformed the department,” and was the “gold standard” when it came to developing positive culture and relationships with her staff. Parmigian praised her innovative work in ensuring safe transportation for students, and discussed how she worked with determination to implement new bus routing in the middle of the school year.

“Jeannie is a role model for all leaders in the district in creating a positive and fun work environment for our bus drivers, and being a bus driver is one of the most challenging professions in the school system,” said Parmigian.

Behnken’s staff of more than 25 surprised her with hugs and a large bouquet of flowers.

Behnken was nominated by members of the Board of Education, the district staff, and other area transportation directors. Behnken will be recognized at the conference of the Ohio Association of School Business Officials in Columbus in April, and by the Ohio School Boards Association in November.

Behnken has served Benton-Carroll-Salem Schools as Transportation Director since December 2014. She began her career with the district in August 1988 as a bus driver, and also worked as a site director, lifeguard, and as a staff member at the Board Office.

The school district will receive a $500 scholarship to be awarded to a graduating senior Behnken will select.

“I know that I speak for the entire Board of Education and treasurer in saying that no one is more deserving of this award,” said Parmigian. “She is an exemplary leader who excels at relationships and keeping our students safe under conditions that can be trying. She is a great asset to her profession and to this school district community.”