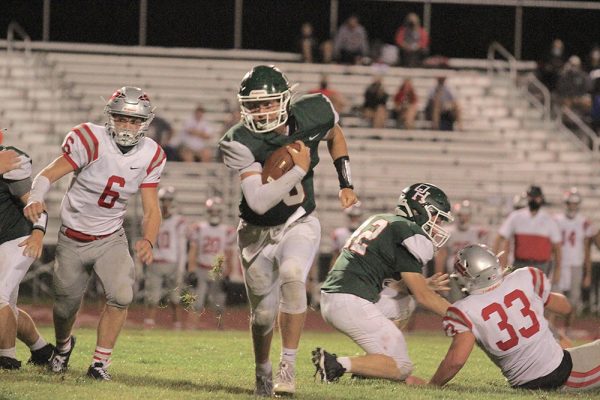 OAK HARBOR — When a big play needed to be made, Bellevue answered the call.

The Bellevue Redmen (1-0) converted on two fourth downs on their opening drive, which resulted in a touchdown, and came up with a major stop after the Oak Harbor Rockets (0-1) nearly scored a touchdown with seconds remaining before halftime. But the biggest play of the game came when Keegan Ray found Nate Davis on a 23-yard touchdown pass with 3:23 remaining in the game to give the Redmen a 14-7 lead, which would be the final score.

Oak Harbor almost scored at the end of the first half, but had to run its last play in hurried fashion. Quarterback Ashton Schroeder had to snap the ball from the Bellevue 3-yard-line with just one second left before a host of Redmen defenders tackled Collin Fauver (12 carries, 45 yards) for a loss as time expired.

The play was set up by a 47-yard connection between Schroeder and Nick Wirkner with 14 seconds remaining, but a fumbled snap on first-and-goal forced the Rockets into running their final play out of sync.

“Ashton threw a nice ball to Nick Wirkner,” said Oak Harbor coach Mike May. “We ran a play and fumbled the snap, so it took some time off, and we just weren’t able to score. That was an opportunity that slipped away.”

And after falling behind, 7-6 in the second half when Schroeder scored on a 9-yard run on fourth-and-goal, Bellevue traded possessions with Oak Harbor before getting good field position and driving 51 yards in six plays, scoring the touchdown when Ray connected with Davis.

The Rockets (0-1) got the ball at their own 21 with a chance to tie the score, but Preston Ray intercepted a pass on third-and-17 with just under two minutes remaining.

Oak Harbor’s lone score came early in the fourth quarter when the offense drove 75 yards in 16 plays and scored on the run by Schroeder. A key play came when the Rockets converted on a fourth-and-4 at the Bellevue 39 when Gannon Duty gained nine yards on a reverse. Oak Harbor (0-1) would score seven plays later. 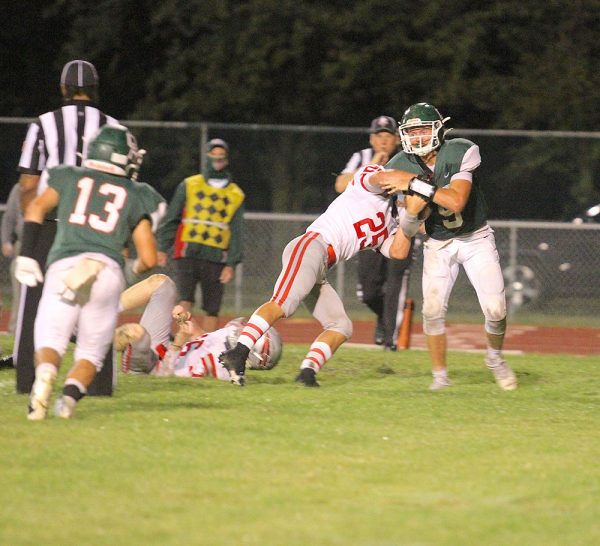 Schroeder had a good game, completing 14-of-18 passes for 106 yards and an interception.

Bellevue drove 60 yards in 13 plays on its opening drive, which resulted in a touchdown, but the extra point was missed, leaving the Redmen with a 6-0 lead. Bellevue converted on a fourth-and-12 from the Oak Harbor 42 and got another first down facing a fourth-and-15 at the 34.

Despite the loss, May was able to find some positives.

“We were real proud of how we played out of halftime. We went down and scored right away,” he said. “We stress that, and we had the momentum for most of the second half. I was really proud of how hard our kids played. We had a number of guys who were playing for the first time under the Friday Night Lights, and I was proud of the way they competed. It was a great high-school football game, and in the end, Bellevue just made a few more plays.”The Rocket defense allowed just 206 yards of total offense.

“I thought the defense played well. We were concerned about their quarterback running the football,” said May. “Our pursuit was good, we ran to the ball. The one thing we need to do better is get off the field on third and fourth down.”

Oak Harbor faces Vermilion (0-1) on Friday. The Sailors lost, 51-20 to Perkins in their opener.

“They’re much improved from last year. They had no seniors last year, so they have virtually everyone back,” May said. “They have some three-year starters. The final score in the Perkins game wasn’t really an indication of how competitive that game was. They’ll be ready to play.”