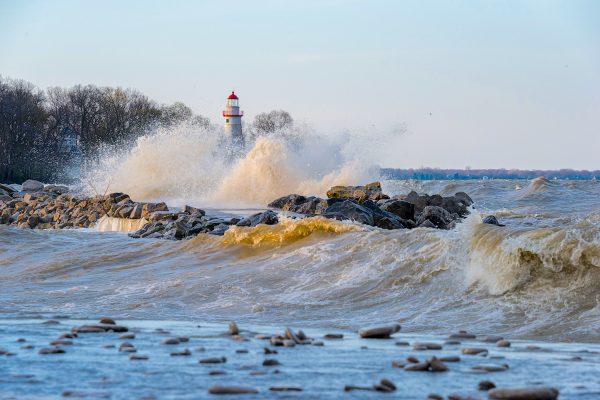 Lake Erie and all of the Great Lakes have been setting records for high water, with brisk northeast winds a guarantee of flooding along the Port Clinton and Marblehead shorelines. Terry Vacha captured the fury of the nor’easter on Sunday, April 26 as it battered the Catawba Peninsula and the Marblehead Lighthouse. (Photo by Terry Vacha)

Local shoreline residents have to batten down the hatches when a nor’easter is in the forecast.

That was the case last weekend, and with record-setting high water on Lake Erie in recent years, the water levels rose and the waves grew large and destructive.

“Main Street in Marblehead was quickly filled with debris, causing village workers to spend a good part of Sunday using a plow to clear the road of gravel and stones to allow cars and trucks to pass,” said Terry Vacha of Marblehead Photographic Art. “It was only a couple of years ago that the Ohio Department of Transportation spent a great deal of money to redo Route 163 near the Marblehead Lighthouse to prevent the big waves from undercutting the roadway. “

North Madison Street in Port Clinton was flooded over the weekend, as the Portage River again spilled over its banks. (Photo by D’Arcy Egan)

There has been notable shoreline erosion from the Marblehead Peninsula to Port Clinton, and beyond. Lakeshore Boulevard on the west side of Port Clinton got a soaking on the weekend, and was covered with gravel. City streets were flooded throughout the weekend, especially North Madison Street and Jefferson Street.

Many of the marinas in the area, including the East Harbor and West Harbor marinas, were flooded. Because of the cold spring weather and a ban on fishing charters because of the Covid-19 pandemic, the majority of boaters have yet to launch for the season.