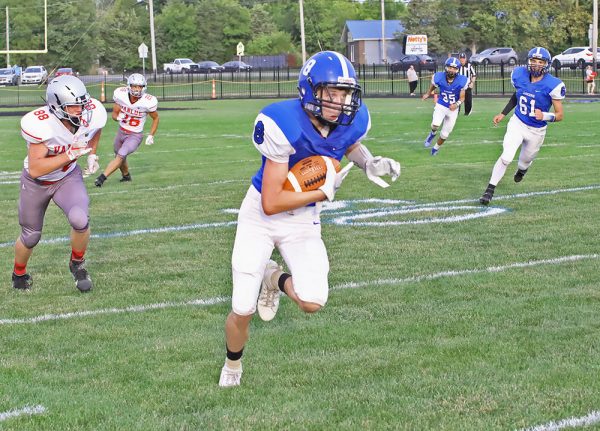 Danbury High School’s Brady Lenthe returns an intercepted pass in a game against Vanlue as Wyatt Caskey and Brandon Wunder follow their teammate. The Lakers lost to Vanlue, 47-13, on Friday at Biro Field. Next week the Lakers will host the Ottawa Hills Green Bears visit Danbury for a 7 p.m. kickoff Friday. (Photo by John Kozak)

DANBURY TWP. — Vanlue jumped on Danbury early and it proved too much for the Lakers to overcome as the Wildcats won, 47-13.

In the second quarter, Cole Shortridge (12 carries, 54 yards, 1 TD) scored on a 2-yard run to cut the deficit to 20-13. However, two touchdown passes (27, 12) from Jaren Kloepfer to Jared Kloepfer later in the quarter pushed the lead to 34-13, effectively putting the game out of reach. The duo connected for two more touchdowns (12, 29) in the second half to close out the scoring.

“It was a perfect storm of bad circumstances that hit us too consistently and too consecutively. They got us on a big run early and we responded pretty well to that. We scored a touchdown to bring the score back (to 6-6), and they returned the kickoff on us. Then we snapped the ball over the quarterback’s head and they fell on it in the end zone. That was 14 points in about 30 seconds of play,” said Danbury coach Keith Mora. “I think because of that, we had lost our way a little bit. The one thing I stressed is that we can’t get this back in one drive. I do think our kids were pressing a little bit on offense, (and) we threw a couple of deep balls that we shouldn’t have.”

Mora had high praise for Vanlue.

Conrad has a great deal of responsibility being the quarterback in the air-raid offense the Lakers (0-1) employ. He was 14-of-37 passing for 175 yards with a touchdown and four interceptions.

“The thing about Kaden, he’s been starting since the fourth game of his freshman year. Look at the offense we were running. We never asked him to do the things we’ve asked him to do now. When we were a Wing-T offense, he was someone we needed to hand the ball off,” said Mora. “On Friday, we threw the ball probably 80 to 85 percent of the time. When we get to practice, we’ll break it down. It’s something our whole program has bought into.”

“They’re completed different (than what) they used to run with the pistol-version of the triple option. Now they’re under center, sometimes with double tight ends and Wing-T concepts; they run the ball downhill,” said Mora.
“They played Gibsonburg and it was a lot closer than it showed.

“We have to find a way to get them off the field. Offensive efficiency is going to be important. We have to make sure that we optimize our time with the ball.”