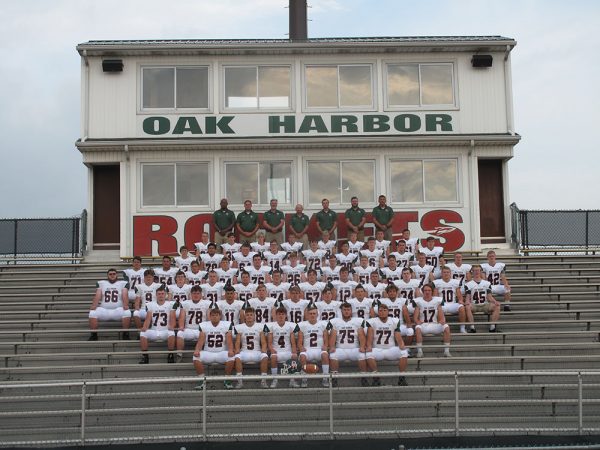 Preview: Last season, Oak Harbor won the Sandusky Bay Conference Bay Division and advanced to the Division V regional semifinals.This year, with a talented, experienced roster, the Rockets are primed to win another league title and make a run in the playoffs.
“We are looking to build off the momentum we gained last season. We have 15 seniors that have provided excellent leadership for our football team,” said Oak Harbor coach Mike May. “Our overall numbers are up throughout the program, which will help us create more depth at all of the positions.

Quarterback Jac Alexander is a dual threat who commands the offense, which will operate out of three- and four-wide receiver sets. He is joined in the backfield by Clay Schulte, the reigning SBC Player of the Year. Ryan Ridener is the other running back and Tyler May, Ryan Nuhfer and Gage Brough are the receivers.

“We are a power spread football team,” said May. “We will play without a tight end and be in three- and four-wide receiver sets.”

The Dowling brothers transferred to Oak Harbor from Clyde and are currently appealing an adverse ruling from the Ohio High School Athletic Association. An OHSAA rule states players who transfer schools are only allowed to participate in athletics for the first half of their first season at the new school, unless they meet an exception for the rule.

To qualify for this exception, both of a student’s parents must change their legal residences from one school district to another.

The Dowlings’ claim was denied, but the family has appealed the ruling. If the ruling is upheld, the family or the high school could take legal action against the OHSAA.

The Rockets, meanwhile, had one scrimmage, which took place against Lake. May saw some good things, but there are also things the team has to clean up.

“The defense did a great job of pursuing the football and playing aggressive. On offense, we were physical and moved the ball well,” he said. “We have a lot to work on, including ball security, since we turned it over three times.”

“We are an even front defense,” May said. “We play a 4-2-5 defense against spread teams and will look more like a 4-4 against Wing-T and other power-running offenses.

The defensive line includes Laughlin, both Dowlings and Jordan Arnold. Schulte and Ridener are the linebackers. The secondary includes Alexander, Dylan Schiets and Collin Fauver (safeties) and Tyler May and Nick Wirkner (cornerbacks).

The Rockets were picked to win the Bay Division, but May sees plenty of teams that will provide a stiff challenge.

“The Bay division is wide open just like last season,” he said. “There are multiple teams that have a shot to win the championship.”