Birders enjoy a bonanza of waterfowl at East Harbor 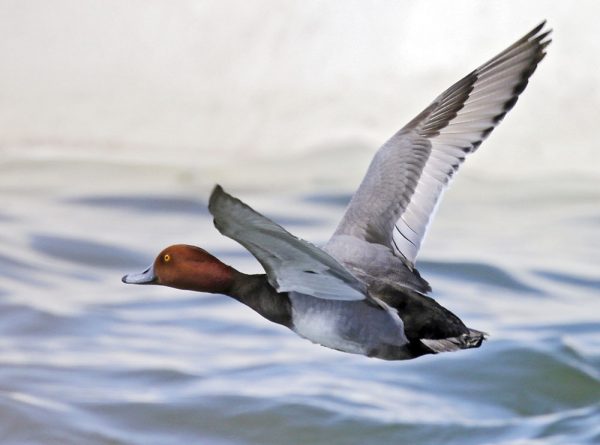 The migration of North America’s beautiful waterfowl is a two-way street, with ducks and geese heading south in fall and winter and north in spring. This week East Harbor on the Marblehead Peninsula has been a birdwatching gold mine, with thousands of big ducks such as canvasbacks and the pictured redheads stopping to visit. (Photo by Mark Duncan)

The migration of beautiful waterfowl is a two-way street, with ducks and geese heading south in fall and winter and north in spring. Ottawa County and Northwest Ohio has such a wonderful collection of spring visitors that The Biggest Week in American Birding attracts more than 100,000 birders.

The exceptional spring birding will be featured on May 8-17, but it is not the only time of year to break out the binoculars and enjoy the colorful birds.

This week East Harbor on the Marblehead Peninsula has been a birdwatching gold mine, with thousands of big ducks such as redheads and canvasbacks stopping to visit. Normally late to start south, canvasbacks migrate in lines and irregular Vs. In feeding areas, compact flocks fly in indefinite formations. Their wingbeat is rapid and noisy and their speed is swift.

The feeding behavior of the canvasback is highly variable. In some areas they feed at night and spend the day rafted up in open water, as they have this week on the Marblehead Peninsula. In other areas they feed inshore mornings and evenings.

They are sometimes seen in open marshes, especially in spring, but they prefer the deep waters of lakes and rivers. Those diving ducks frequent large, deep lakes and rivers, as well as coastal bays and inlets.

They feed by diving, often to considerable depths. Since their wings are smaller in proportion to the size and weight of their bodies, they have a more rapid wingbeat than puddle ducks.

The canvasback and redhead ducks nest in the North Country, and generally don’t head south until early in the new year. This year’s February migration was most likely prompted by a late-arriving Arctic blast in the extreme North Country, including Alaska, the Yukon, Northwest Territories and Canada.

For waterfowl hunters, the late migration is a bit of a disappointment, because the Northern Ohio duck hunting seasons are usually over before the big flocks arrive.
Learn more about the May birding opportunities in Ottawa County and Northwest Ohio, visit

The Beacon will feature the Black Swamp Observatory’s annual program, and lots of birding information in its May 7 issue.