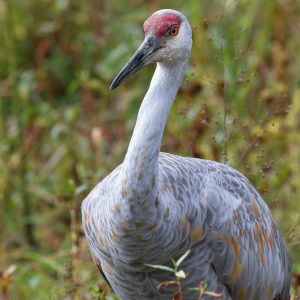 Observers found 371 sandhill cranes in Ohio as part of the one-day Midwest Crane Count held last month, according to the Ohio Department of Natural Resources (ODNR) Division of Wildlife. The count was coordinated by the Division of Wildlife, International Crane Foundation, and Ohio Bird Conservation Initiative.

The survey was conducted in 24 preselected counties during the crane’s nesting season. Counties were selected based on the availability of wetland habitat that cranes use for nesting. The top seven counties with the most sightings were Wayne (84), Lucas (60), Geauga (56), Trumbull (47), Holmes (18), Ottawa (17), and Wyandot (17). Volunteers searched crane habitat within a 10-square mile survey block. Results were reported via eBird

The count was the second of what will be an annual event to track the status of sandhill cranes in the Buckeye State. The count in 2021 found 160 sandhill cranes across five counties. Sandhills can be secretive during the breeding season, and the survey is an effort to better understand Ohio’s breeding population.

A sandhill crane is a tall wading bird characterized by a long neck and bill. It is mostly gray in plumage with a red patch on its forehead. It is often recognized by its rolling bugle call. Sandhills are migratory, breeding in wetlands across the northern U.S. and Canada, and wintering farther south in North America.

These regal birds were once extirpated from Ohio. They returned to Wayne County in 1987 to breed and have been slowly expanding since. They are still listed as a threatened species in Ohio.

Volunteers interested in helping with the 2023 Midwest Crane Count can mark their calendars for Saturday, April 15, 2023. Volunteers should be familiar with crane identification by sight and sound. More information is available from the Ohio Bird Conservation Initiative or the International Crane Foundation.Wildlife enthusiasts can support sandhill cranes by purchasing an Ohio Wildlife Legacy Stamp. Fourteen dollars of every $15 Ohio Wildlife Legacy Stamp sold are invested in the state’s Wildlife Diversity Fund. This fund supports habitat restoration, wildlife and habitat research projects, creation of free wildlife educational materials, as well as efforts to restore and conserve endangered and threatened species. The Ohio Legacy Stamp can be purchased online through Ohio’s Wildlife Licensing System and at any location that sells hunting and fishing licenses. Learn more about sandhill cranes and the Division of Wildlife’s research at wildohio.gov.

Editor’s note: A list of sandhill cranes found in each of the 24 counties surveyed during Ohio’s 2022 sandhill crane count is shown below. The numbers below are preliminary and subject to change.