Bistro 163 lights up with local matches to feed Ukraine refugees 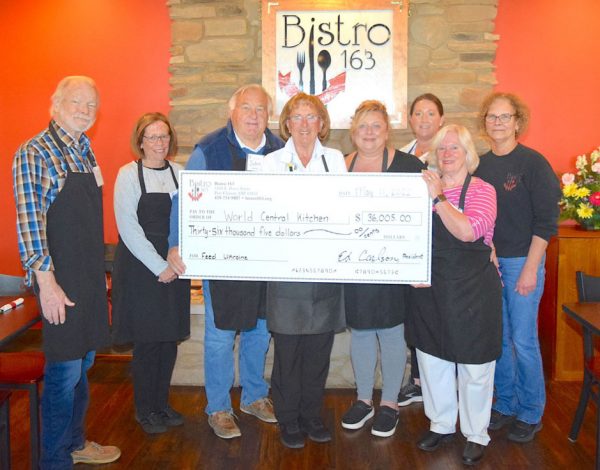 During the entire month of April, Bistro 163 has been devoted to raising funds to support World Central Kitchen and Chefs for Ukraine, two major agencies feeding refugees displaced by the war in Ukraine.

Two of Bistro 163’s local benefactors in Port Clinton (Hal and Diane Warnke Hawk and a second anonymous couple) put up $5,000 each as matching funds to stimulate donations, boosting the total donations to $36,005 to help feed the hungry.

Contributions can still be made in three ways: 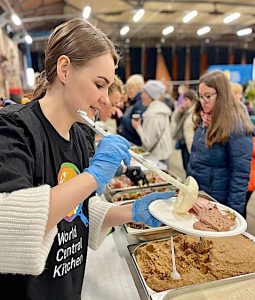 World Central Kitchen and Chefs for Ukraine have been feeding Ukraine refugees who have fled to neighboring counties or are still trapped in the Ukraine.

World Central Kitchen has been feeding refugees who have fled to neighboring countries including Hungary, Moldova, Poland, Romania and Slovakia, as well as other countries in the region, including Belarus, Bulgaria and the Czech Republic.

Almost two-thirds of the Ukraine’s 7.6 million children have been displaced just six weeks into the invasion by Russian forces, according to UNICEF. An estimated 2.8 million children are internally displaced, while another 2 million have fled Ukraine altogether. In addition to the millions of children that are now refuges, half of the estimated 3.2 million children who remain in Ukraine are at risk of not having enough food.

On Orthodox Easter, which was Sunday, April 24, World Central Kitchen teams across Ukraine, Poland, and beyond celebrated the Easter holiday with special meals, sweet treats and painted eggs. But they didn’t forget about their regular meal preparations and deliveries.

“Hunger has no days off. If we don’t feed these people, no one will. It’s our duty,” said Chef Michael from WCK restaurant Vortutai in Odesa.

Bistro 163 is proud to have collected more than $36,000 in donations for World Central Kitchen as they continue to increase food security and build community, feeding hundreds of thousands of refugees in eight countries. The fundraiser has been an unqualified success because of the generosity of the local community, and Bistro 163 more than met its matching gifts.

Those wishing to donate to World Central Kitchen now, may do so on their website, www.wck.org. Because food is a universal human right! 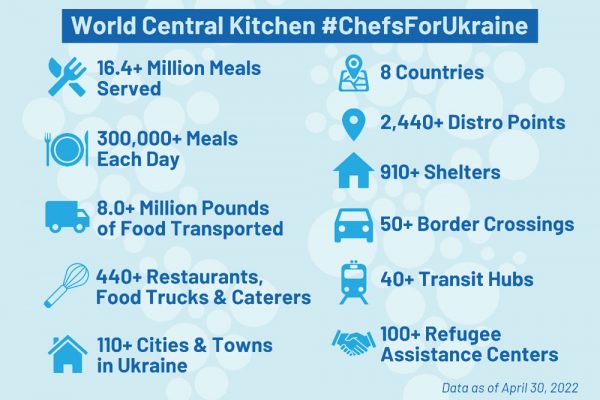 A documentary spotlighting Chef Jose Andres and World Central Kitchen will be shown on Disney+ beginning on the Memorial Day weekend. The National Geographic documentary, “We Feed People,” is directed by Oscar winner Ron Howard. It highlights World Central Kitchen’s efforts to feed people across the globe in the wake of natural disasters.