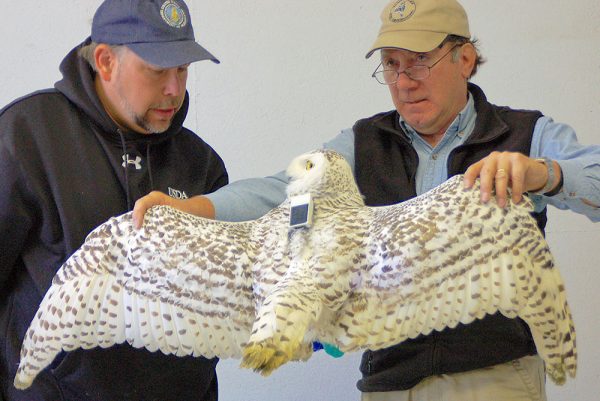 Made famous by the popular Hedwig of Harry Potter, the Snowy Owl has become one of the most recognizable birds alongside the Bald Eagle, Canada Goose and Blue Jay. This large, ghostly bird of prey, spends its summers in the high arctic, far from any human activity. But come winter, many Snowy Owls wander south, presenting bird watchers with the perfect opportunity to see these northern denizens in flat, open areas such as Northwest Ohio.

Founded in 2013, the project is staffed by a large volunteer team of scientists, bird banders, and wildlife veterinarians, funded entirely by tax-deductible donations from the public. 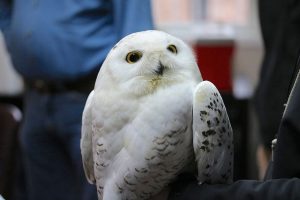 One of the most important elements of the project’s research is understanding the winter ecology of Snowy Owls. GPS/GSM transmitters record the bird’s location, altitude, and flight speed as frequently as every six seconds. Other sensors add additional layers of data to help understand how these birds hunt, migrate, and survive locally on their more southerly wintering grounds and in the Arctic.

BSBO has tagged two owls for Project SNOWstorm: “Buckeye,” in February 2015 and, most recently, “Wolverine,” on Jan. 3.

Buckeye, a three-year-old female Snowy Owl, was captured at the Detroit Metropolitan Airport (DTW) by USDA Wildlife Services. The bird was tagged with a GPS transmitter by Mark Shieldcastle, Research Director at BSBO, and released in farmland north of Oak Harbor.

Nearly five years later, this past Christmas Eve, Selena Creed, a wildlife biologist at Detroit Metropolitan Airport captured a Snowy Owl on the runway wearing a backpack. It was Buckeye!

Typically, when a bird flies near a reception tower, data from the transmitter downloads and is sent to monitors at Project SNOWstorm.

“In spring she migrated north, skirting the western side of Hudson Bay and spending the summer of 2015 in the Boothia Peninsula in the Canadian Arctic, an area we have since found is very popular with many of our tagged owls,” Scott Weidensaul of Project SNOWstorm reported.

“The winter of 2015-2016 she migrated south to southern Ontario and northern Ohio, although by then her transmitter was becoming unreliable. We tried to organize a trapping expedition to recapture her and trade transmitters, but were unable to do so. The last we had heard from her was March 21, 2016, on the north shore of Lake Erie.”

The project hadn’t heard from Buckeye since 2016, but here she was, backpack in tow.

Buckeye, now at least seven years old, came back to visit the old DTW airfield. She was captured, and determined to be in great condition. Her faulty transmitter was removed and she was released into rural, northern Michigan. The transmitter will be analyzed as it may still hold valuable data that could be extracted.

On New Year’s Eve day, Detroit Metropolitan Airport had another snowy visitor. This male Snowy Owl, who DTW wildlife biologist Selena Creed had originally banded as a juvenile in 2017, had reappeared on the runway. Creed contacted Project SNOWstorm, asking if the bird could be fitted with a transmitter before being relocated. That’s when BSBO came into the picture again.

Shieldcastle, with the help of BSBO Staff Ornithologist Ryan Jacob, and DTW Wildlife Biologist Selena Creed, fitted the male Snowy Owl with a transmitter on Friday, Jan. 3. Since the other Snowy Owl that BSBO helped outfit was named Buckeye, staff, with the agreeance of Selena Creed, named the bird Wolverine.

After Wolverine was fitted with his backpack, Creed transported him for release in Oakland County, northwest of Detroit. Since his release, Wolverine has been tracked moving north, parallel with I-75.
To learn more about Project SNOWstorm, visit projectsnowstorm.org. To learn more about Black Swamp Bird Observatory’s mission to team research and education to promote bird conservation, visit bsbo.org.