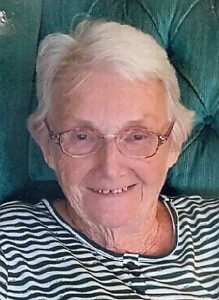 Blossom Shapiro Schulak was born in Toledo on August 20, 1929 and passed peacefully on July 5. The middle daughter of a loving family she was a red-haired woman of good humor who loved being with her six other sisters, and younger brother, and graduated from Scott High School. Family was deeply rooted in her values and she was known as the favorite sister, aunt and grandmother.

She married Morton Schulak in 1948 and moved to Chicago where Mort earned his Doctor of Podiatry degree. After a move to Texas the family, now having added a son Nelson and twin daughters Libby and Ann, they returned to Toledo area in the mid 1950’s.

Known by friends as ‘Blos’ she was an avid reader, keen bridge and Mah Jongg player too. She was also skilled in sewing, making her own patterns and dresses for her girls, and taught them knitting skills.

In 2002 she moved in with daughter Ann and Wayne Duez, proprietors of the Victorian Inn in Marblehead. Always of good cheer, she enjoyed her three children and their families: Ann (Wayne Duez), Libby (Brent Bissell) and son Nelson. She reveled in attention of her nine grandchildren and 22 great grandchildren.

Blossom worked as a legal secretary and legal office manager in Toledo. A three time cancer survivor, her 90th birthday last August was a massive production with outdoor tents to house family from all over, beautiful flowers, exceptional foods and desserts and featured members of the Toledo Symphony playing live the music she had loved throughout her life.

Friends may call from 10am until time of Funeral Services at 10:30 am, Thursday, July 9, at the Gerner-Wolf-Walker Funeral Home, 216 Washington St, Port Clinton. Interment will be private at Eagle Point Cemetery, Rossford.

Please share memories or condolences with Blossom’s family at www.walkerfuneralhomes.com.

Memorial Donations in honor of Blossom may be directed to the Ottawa County Humane Society, 2424 Sand Rd, Port Clinton, OH 43452.