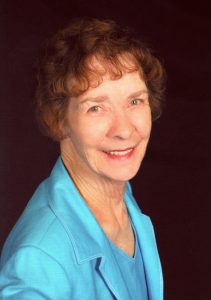 Bonnie Rose English, 88, of Port Clinton, passed away on Thursday, Oct. 14, at Firelands Regional Medical Center in Sandusky after a brief illness. She was born on Jan. 19, 1933, in Ashley, the daughter of the late Ellsworth and Evelyn (Rosecrans) Bartlett. She married Dennis Dean English on Dec. 30, 1954, and he preceded her in death on Aug. 28, 2003.

She graduated from Findlay Public Schools in 1950 and attended Miami University. She then went to work at City Loan in Findlay for a year and then worked as a receptionist for Dr. Galbreath in Findlay from 1953-1954. During this time, she met and fell in love with Dennis, and they got married. Her family was important to her, so she became a stay-at-home mom raising and caring for her family. She then went to work at the Little General Store in Port Clinton, which housed Mary’s Blossom Shoppe and Cindy’s Dress Shop.

sister, Judy Cryer; as well as nieces and nephews. She was preceded in death by her parents; her husband; her son, Christopher D. English; her granddaughter, Sarah Mahler-Boleratz; and her brothers, Richard and Robert Bartlett.

Visitation will be held at Trinity United Methodist Church, 135 Adams Street, Port Clinton, on Saturday, Oct. 23, from 10 a.m. until a Memorial Service at 11 a.m. with Pastor Warren Brown officiating.

In lieu of flowers, Memorial Contributions may be made to the church or to the Lupus Foundation of America, Inc., 2121 K Street NW, Suite 200, Washington DC 20037. Online condolences may be expressed at www.walkerfuneralhomes.com. The Gerner-Wolf-Walker Funeral Home and Crematory, Port Clinton, assisted the family with arrangements.