Book Review: Lifelines, A Doctor’s Journey in the Fight for Public Health 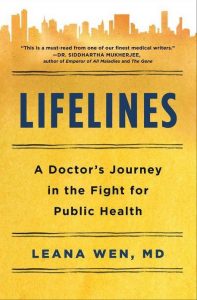 For those of us who watch or read the news often, it would have been difficult in the past year not to come across the name Dr. Leana Wen. Dr. Wen has been seen on the nightly news, CNN, and in the Washington Post on a frequent basis discussing the public health implications of the pandemic.

I was amazed when she had a baby early in the pandemic and came back two weeks later to keep viewers and readers up to date on the latest health news. But there is so much more to learn about Dr. Wen.

She tells her story from her days of poverty in China to her days of homelessness in the U.S to her recent prominence in her book “Lifelines, A Doctor’s Journey in the Fight for Public Health,” which was published this year.

The most amazing part of this book is how much Leana Wen has accomplished in her not-quite-forty years—and she wrote this book and another one, too!

Her family immigrated to the U.S. on an asylum visa after the Chinese Cultural Revolution, during which her father often disappeared—most likely jailed for weeks at a time. The family arrived with just $40 dollars in their pockets. Despite the economic disadvantage, Dr. Wen embarked on a demanding program of education despite language differences and bouts of homelessness and hunger.

Dr. Wen was a bright and ambitious student who won a spelling bee just two years after learning to speak English. She attained higher education by entering college at the age of 13 on an early entry program and by pursuing multiple scholarships.

Dr. Wen’s vocation to work in public health came from her many life experiences. She broadly defines public health to include medical needs, poverty, homelessness and safety.

She has found fullfillment, whether working in direct patient care, as health commissioner for Baltimore, Md., teaching, or frequently communicating to the public through the media.

Wherever she went, she quickly saw the issues important to her and took on those problems. Dr. Wen made wise use of mentors and seemed to have endless energy to take on new challenges.

“Lifelines, A Doctor’s Journey in the Fight for Public Health,” is a testament to the drive of her grandparents and parents who gave her a strong basis for her own hard work and to her husband, who has given her unlimited support.