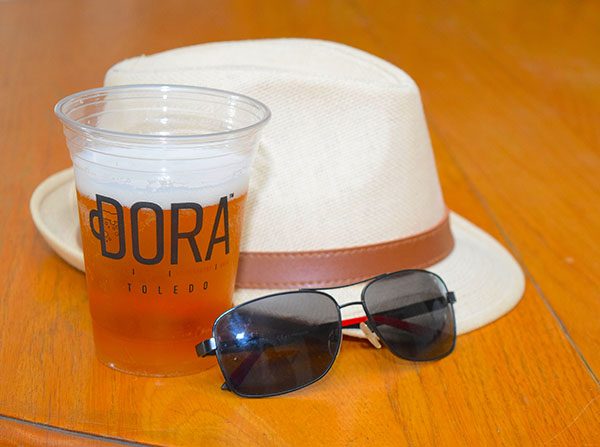 The DORA rules that allow alcohol to be consumed from open containers while outdoors in Toledo’s downtown night club district has special cups with rules printed on the cups. Port Clinton’s MORA rules will be much the same. (Photo by D’Arcy Egan)

Passed as emergency legislation by council, the city must now petition the Ohio Department of Liquor Control for its approval. That should take a couple of weeks, but gives Port Clinton officials time to install the MORA signs, order the needed cups and posters and explain the rules to local liquor establishments.
Port Clinton Chamber of Commerce and Main Street Port Clinton officials firmly believe the new freedom to tour Port Clinton with beer, wine or cocktail in hand will benefit downtown businesses, as well as the popular Walleye Festival, Walleye Drop, Rock the Light concerts, Fourth of July events, car shows and more that bring people downtown.

“We think the MORA legislation will bring people to the Port Clinton area,” said Nikki Adams, president of Main Street Port Clinton. “We thoroughly investigated the Downtown Outdoor Refreshment Area in Toledo, and it has been a big hit with the folks who come downtown to listen to music, see outdoor shows or wander from establishment to establishment.”

DORA supporters in the Central District of Toledo, where partiers and sports fans are prevalent, report they have had a peaceful transition allowing the open carry law.

“We’ve had absolutely no problems,” said Paige Brace, a server at the popular Holy Toledo Tavern on North St. Clair Street, adjacent to Fifth Third Field where the Toledo Mudhens play baseball. “The rules are right on the DORA cups, and people have obeyed them.”

The MORA cups in Port Clinton will also have the rules printed on them, and be for single-drink use. Revelers would not be allowed to have their MORA cup refilled at any bar or restaurant.

Customers often head outside bars, taverns and restaurants to have a cigarette or cigar. Now they will be able to take their drinks with them. And to make sure they don’t make a mess, Main Street Port Clinton has teamed up with the local Kiwanis Club, Rotary Club, Women’s Club and Snip and Sharon Snider to purchase nine cigarette ash urns for the downtown streets.