Broadcast of Wylie’s ‘drop’ a success, with double the drops set for 2021 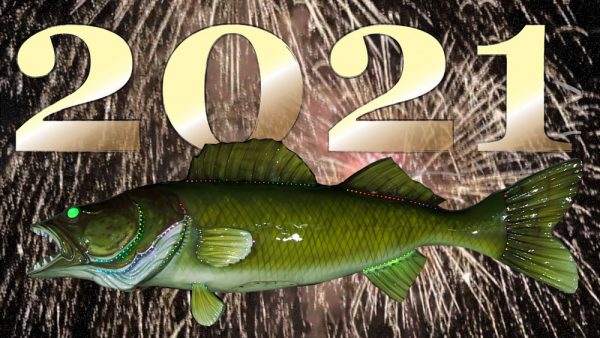 Wylie Walleye dropped in this year on computer and television screens all around the world for the virtual New Year’s Eve Walleye Drop during Port Clinton’s celebration at midnight. (Photo by Nick James Productions)

The Walleye Drop featuring Port Clinton’s Wylie the Walleye on New Year’s Eve was declared a rousing success. To make sure fans in Port Clinton — and around world — tune in again in 2021, there will be double the fun.

The Wylie Walleye Foundation committee has announced the live broadcast will now be an annual event, beamed globally to fans of the fish. For the 25th anniversary of the Walleye Drop on Dec. 31, 2021, the in-person event will return as the crowds return to downtown Port Clinton.

“Our goal has always been to bring more awareness to our area and the off-season amenities to be found in Port Clinton,” said committee spokesman Kristina Willoughby. “While the in-person show this year had to be cancelled because of the pandemic, there were more than 20,000 visitors to our www.walleyedrop.com website over the last two weeks, with sales from as far away as Texas, Florida, and Upper Michigan.”

Willoughby said this year’s show had been made possible by generous support from local sponsors and the community.

“None of us knew what to expect when we decided to take the iconic Walleye Drop virtual. With the pandemic causing even more of a significant strain as the year came to a close, there were obstacles,” said Willoughby. “But with the support of our sponsors, guests, top notch entertainment and enthusiasm of our cast, the Wylie Walleye Foundation committee was able to make this happen.”

A Nick James Production, “Walleye Madness at Midnight,” was a huge success, said officials, as well as the music of Miss Kitty and the Litter, and a hysterical host performance by “Charlie,” played by Rich Reidmier. Adding to the New Year’s Eve fun was a visit from Father Time and the Winter Queen, Port Clinton Mayor Mike Snyder and State Senator Theresa Gavarone.

The downtown crowds will return for next year’s celebration of “Walleye Madness at Midnight,” with street interviews, live video of the in-person event and the same live music and entertainment. The 3rd annual Bar Swim will also be back, giving residents and visiting revelers the chance to enjoy the many great entertainment establishments in Marblehead and Catawba.