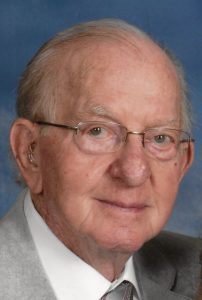 Bruce Bridgeman, school administrator, developer, and inventor, died July 12 at Otterbein SeniorLife in Pemberville after a brief illness with his wife of 72 years and family by his side. He was 94.

A longtime Marblehead and Port Clinton resident, Bruce enjoyed boating on Lake Erie, giving tours of the Marblehead Lighthouse, and service for Rotary and his church, St. John Lutheran in Port Clinton. He and his wife, Martha, traveled extensively across the USA, Europe, and southern Africa. He maintained a high level of activity into his 90s, keeping fit by cutting firewood, biking and walking.

Bruce was born July 4, 1928, in Randolph, to Fred and Barbara Brigeman. He attended schools in Cuyahoga Falls and Copley, where he met Martha Boss. The high school sweethearts were married in 1949 following Bruce’s service with the Army Air Corps in post-war Japan. He treasured an Honor Flight to Washington D.C., arranged by his niece and son in 2017 to commemorate his military service. He attended university on the GI bill, receiving BA and MA degrees in education and school administration from Kent State University. During his career, he served as an industrial arts teacher and school administrator for several districts near Akron, Frontier in Southeast Ohio, and retired as Danbury Schools superintendent.

Bruce’s projects in his retirement showcased his many talents. In the early 1980’s he managed Lonz Winery on Middle Bass Island where he and his crew of carpenters and college students restored the shuttered winery to a thriving tourist destination hosting thousands of visitors on summer weekends. His next accomplishment was developing Woodwinds, a 12-acre community of single-family homes in Marblehead. He built his own house there, including carrying limestone slabs for the fireplace. His final project was inventing and patenting a clothes hanger for children called the ‘Hang-up.’

Above all, Bruce is remembered for his devotion to Martha and his family. He sought to help his children and grandchildren prosper and took great pride in their accomplishments. Bruce was also cherished by many other ‘families’ including his Lonz Winery, foreign exchange students, church, and German relative families.

Bruce was preceded in death by his parents, six siblings and his children Daniel, Paul, and Rebecca. He is survived by his wife, son Thomas, and five grandchildren.

A memorial service will be announced at a later date. The family suggests tributes to Honor Flight Northeast Indiana.