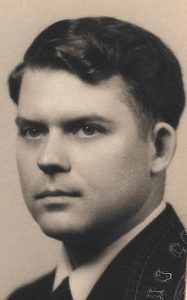 Burnell “Bernie” Franklin Moneghan, 94, of Port Clinton and formerly of Fremont, passed away on July 17 at Otterbein Senior Life of Marblehead. He was born on June 14, 1926 in Fremont to Dr. Frank C. and Belle (Kline) Moneghan. Burnell graduated from Fremont Ross High School in 1955 before enlisting in the United States Navy in 1944 where he served in the Pacific during WWII. After giving so many years of hard work as a vault teller for Croghan Colonial Bank, he was promoted to his own East State Street office as a purchasing agent and the superintendent of maintenance for all of Croghan Colonial’s buildings. He retired in 1996. Burnell was a member of St. John’s Lutheran Church in Fremont and served as a Usher, He was President of the Fremont Shrine Club, Shriner’s Hospital for Crippled Children, the Fremont Masonic Lodge, Eastern Star Fremont Order #133, High Twelve Club serving as President Valley of Toledo Ancient Accepted Scottish Rite, the American Legion, Fremont Flag Unit, and the Port Clinton Elks Lodge #1718. He married Anita Wax March of 1956, and she survives.

In addition to his wife, Anita Moneghan, he is survived by his daughter, Terry Moneghan Rodwancy (Don Rodwancy) of Port Clinton, grandchildren, Jessica Ohm (Jon Ohm) and Brooke Rodwancy (James Hensley) , and great-grandchildren, Brayden, Isla and Gavin Ohm. He was preceded in death by his parents, brother, Virgil Moneghan and sister, Luella Moneghan and relatives in Oil City, Penn.

Graveside services will be held Saturday, July 25, at 11:00 AM at Oakwood Cemetery in Fremont. Pastor Matthew Wheeler will officiate. Military honors as well as Masonic Services will follow.

Herman-Karlovetz Funeral Home & Cremation Services, Fremont, as had the privilege of assisting the Moneghan family through this difficult time.