Burning Snowman Fest back on the beach, but not for long 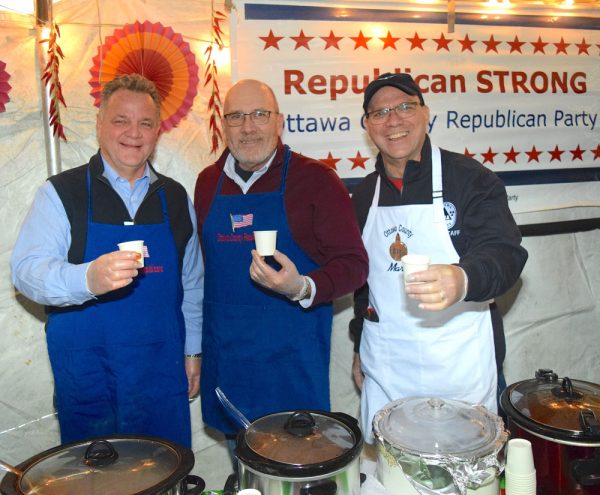 The Family Freeze kicked off the Burning Snowman Festival on Friday with the GOP Chili Cook-Off. Doling out cups of their special chili were, left to right, Ottawa County Commissioners Mark Stahl, Don Douglas and Mark Coppeler. 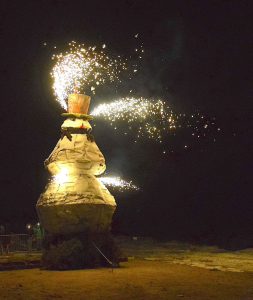 The Burning Snowman named “James” did his part to encourage the winter weather to go away along the Lake Erie shoreline, and speed up the arrival of spring. The pyrotechnics were outstanding, starting with a splash of sparklers before the Burning Snowman went up in flames as hundreds cheered. (Photos by D’Arcy Patrick Egan)

The Port Clinton beach along West Lakeshore Drive was humming with activity last weekend, a sure sign the master plan by City of Port Clinton and the Port Clinton Chamber of Commerce was working like a Swiss watch.

Visitors and locals keep things hopping all summer long in the vacationland area, but winter events have been another matter. The Walleye Drop provides a spotlight on New Year’s Eve — one that’s seen around the world these days — but the cold weather months are generally a time of rest and reflection.

In the past, the events that bring people downtown to party, dine and listen to music had languished as temperatures had plummeted. Local businesses had tried, but the ice fishing on Lake Erie in recent years has become an iffy proposition. Years ago, trying to lure visitors by offering local bands at cozy tavern bars, or hosting snowmobile races, was a stop gap measure.

Mayor Mike Snider, a veteran chili chef who won the GOP Chili Cook-Off in his first competition, and city crews shepherded the big parties. Snider also promised that next year’s Burning Snowman Festival would be its largest. 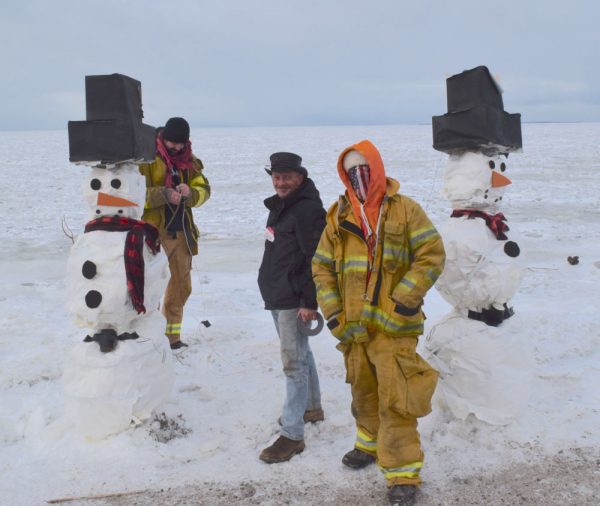 Port Clinton High School’s Wood Tech students created a Burning Snowman of their own for Friday Night’s celebration on the Lake Erie beach at Dock’s Beach House. Getting ready to light up the two snowmen were members of the Ohio Burn Unit of Cleveland, who entertained the crowds with their unique flaming acrobatics.

“We have more room for the Burning Snowman Festival at Waterworks Park, just down the lake,” said Snider. “We held the festival there two years ago, before having to shut it down because of Covid-19. We wanted to return to Waterworks Park again this year, where it would generate more money, but would have cost more money to get it all going.”

The size and scope of the return of the Burning Snowman Festival last weekend has proven a bigger venue is needed, and that will mean going back to Waterworks Park, where many improvements should be completed soon, including the Portage River Walkway, and perhaps more parking.

The mood of Port Clinton is on the rise, as locals embrace that they live in a tourism Mecca on the North Coast. And that city officials, after decades of neglect, have a total renovations of Port Clinton’s infrastructure underway.

Residents can get the hot scoop on Port Clinton’s resurgence at the first State of the City Address by Snider on Tuesday, March 8 at 6 p.m. It’s being held in the City of Port Clinton Municipal Building on Buckeye Boulevard, with attendees directed to the adjacent Ottawa County Municipal Court.