Gale force winds arrived on the Port Clinton shoreline over the weekend, but fans of “Virgil” the Burning Snowman got a break. The 5th annual Saturday night festival and party went off as expected, “Virgil” flamed out admirably and partygoers danced into the night at Dock’s Beach House and tent and Mr. Ed’s Bar & Grill on the sandy shoreline.

Misty rains slightly dampened the crowds, but the big westerly blow held off until early Sunday, when they began rocking the town with brutal gale force winds topping 50 miles per hour. The only victim was the Burning Snowman tent, left standing after Saturday’s party and found flapping in the Sunday morning wind.

The crowd seemed to be a bit larger than last year’s estimate of 6,000, which raised more than $26,000 for such charities as the Ottawa County Family Advocacy Center, Mr. Ed’s Kids for Christmas, the Port Clinton police and fire departments and rettsyndrome.org, a rare non-inherited genetic neurological disorder that occurs almost exclusively in girls and leads to severe impairments.

Virgil The Snowman, featuring a pair of long, long skinny arms this time around, wasn’t the only guy flaming out at this year’s show. Making an appearance was a Cleveland pyrotechnic company, Ohio Burn Unit, that entertains with fire and flames. The seven-person troupe had the crowd cheering by juggling flaming balls, breathing fire and doing fire dances.

Lenny Kromer of Castalia, who created Virgil from old Christmas trees, sheets covered with flammable material and candle wax, began making his creations in 2015 with Norman. He was followed by Charlie, Harold and last year’s Floyd. 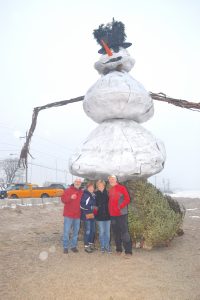 Social media was crowded on Saturday with photographs of the partygoers posing with “Virgil,” the Burning Snowman. From left to right are Sue and Fred Skuling and Tom and Beth Rex. (photo by D’Arcy Egan) 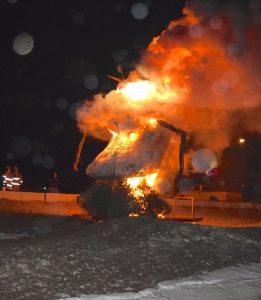 Virgil and Burning Snowman did his best at trying to chase away Old Man Winter at Saturday’s Burning Snowman Festival on the West Lakeshore Drive beach at Dock’s Beach House. More than 6,000 revelers crowded the local bars and huddled around burn barrels on the Port Clinton beach. (Photo by D’Arcy Egan)