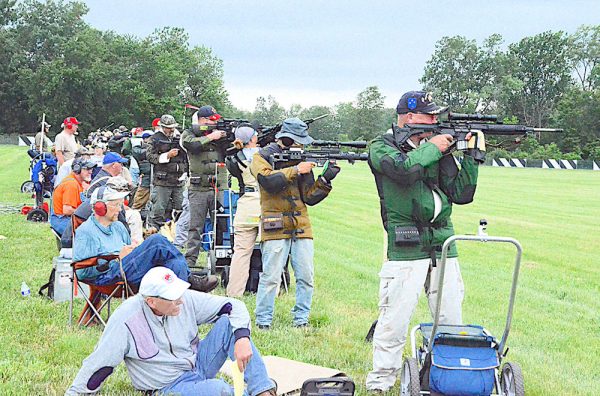 The Viale Range was crowded for special rifle matches held recently that were a prelude to the National Rifle & Pistol Matches on July 11-Aug. 12.

The Civilian Marksmanship Program (CMP), which will hold the month-long National Rifle & Pistol Matches at Camp Perry on July 11 through Aug. 12, hosted an introductory series of highpower and vintage rifle competitions on the grounds of Camp Perry in late June on the base’s Viale and Petrarca ranges.

Petrarca range, which is open to the public on Mondays each week, hosted a Garand/Springfield/Vintage and Modern Military (GSMM) Match. Viale Range was the site of the CMP Cup 800 Aggregate and Excellence-In-Competition (EIC) service/match rifle events.

The GSMM saw 35 total entries over the first day, with Daniel Schaible, 37, of Galloway, Ohio, clinching both the Modern Military and Garand categories and Bret Hart, 60, of Charleston, W. Va., overtaking the Springfield and Vintage Military classes.

CMP team member Sara Rozanski, 43, of Elmore, which is just a few miles from Camp Perry in southwest Ottawa County, finished second in the CMP Cup 800. She was seven points behind team member Nick Till, 47, of Howell, Mich., who had a winning score of 782-32X.

Till returned to Viale on Sunday to best the field of over 60 competitors in the CMP EIC Rifle event with a score of 488-19X. Till maintained a 10-point lead over the second and third place individuals Matt Kellgreen, 34, of Leetonia, Ohio, and fellow CMP team member Danny Arnold, 55, of Clayton, Tex., both firing 478.

Scott Smith, 52, of Concord Township, Ohio, in the Cleveland area earned fourth overall and a hard leg (8 or 10 EIC points) to reach his 30 points needed to earn a Distinguished Rifleman Badge, the highest CMP marksmanship honor

Up next, the CMP is ready to welcome thousands of competitors to the ranges of Camp Perry as they arrive for the 2021 National Rifle and Pistol Matches held at the National Guard Training Facility since 1907. The month-long event features a variety of educational, sales and competitive opportunities for modern and vintage military rifles, pistols and even includes a smallbore and long range rifle series. The CMP also offers indoor air gun events within its own electronic range, the Gary Anderson CMP Competition Center.

Plan a visit by checking out the National Matches page on the CMP website at https://thecmp.org/competitions/matches/cmp-national-matches/.