Can iconic building be saved?

There have been a lot of questions lately about Port Clinton’s historic city hall, which is up for sale again after being shuttered for more than two decades. A contingent of local businessmen and historical experts toured the iconic Neo-Classical Revival-style building recently, marveling at the sturdiness of the structure built in 1900.

From the jail cells in the basement of the limestone block building to the unique third floor shooting range, it was obvious the 22,940-square foot structure has long suffered from neglect. The building was listed on the National Register of Historic Places in February 2000.

Leading the group were Patrick O’Keeffe, who penned the book “History of Ottawa County: The First 175 Years”; Bob Reynolds, grandson of Scott J. Matthews, founder of the Matthews Boat Company in Port Clinton; and retired judge Paul Moon, a fourth generation Ottawa County resident and judge of the Ottawa County Court of Common Pleas from 1991 until 2009.

“The building seems to have some good bones and is structurally sound,” said Moon, who long ago presided in the building’s court room. “The floors are pretty solid, but I wouldn’t want to spend a night in those basement jail cells. The building has so much history, and such a wonderful location.”

After housing Port Clinton and township offices over the years, as well as the Port Clinton police, fire department and EMS crews, public library and historical museum, Port Clinton moved most of those offices to its new home on Buckeye Boulevard in 1996.

The old building sits on the corner of Second and Adams streets, close to downtown amenities in Port Clinton. There is ample parking, but replacing the plumbing, electrical wiring and windows, as well as performing extensive masonry work and refurbishing the interior, would be a yeoman’s job.

Port Clinton had sold the old city hall to a private buyer a few years ago, but nothing was done to refurbish it, most likely because of the high cost. The building is now being marketed by NAI Ohio River Corridor, which specializes in commercial real estate, and priced at $425,000. Real estate agent Leon McCombs, who opened the building for the tour, admitted renovation costs would be substantial.

O’Keeffe grew up in Pennsylvania and on a recent visit to his old stomping grounds, checked out just such a renovation of the old county jail in Towanda, Pa.

“Just like city officials did here, officials in Bradford County, Penn. decided to build new instead of fixing the old building,” said O’Keeffe. “Because of the building’s history and location, townsfolk rallied behind a movement to save the building.

“It’s now called the Bradford County Historical Society Museum, and is a multi-use facility housing a variety of community groups. To do the same with Port Clinton’s old city hall would require a major effort by the entire community to find the resources needed to make it a great home for civic groups and agencies.” 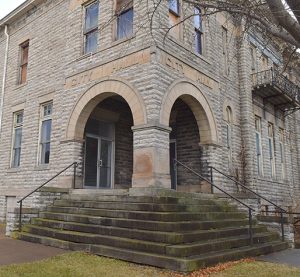 Sitting idle for more than two decades, the historic Port Clinton City Hall on the corner the Second and Adams streets is on the market again. The cost of renovating the limestone block structure built in 1900 will determine whether the building can survive. (Photos by D’Arcy Egan) 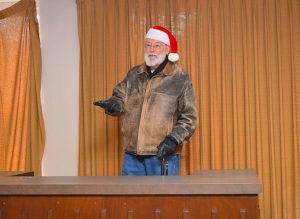 Judge Paul Moon returns to the courtroom in the Port Clinton City Hall where the long-time juror sat once sat. Moon toured the building recently with a small group of local leaders interested in saving the historic landmark. The building has been closed since 1996.