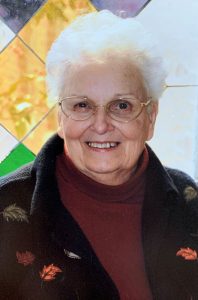 Carol Jane (Inman) Everson, 89, of Maumee, (formerly of Lakeside, and Solon,) passed away peacefully in the arms of her Lord and Savior Jesus Christ on June 20. Born in East Cleveland to George and Gladys Inman, Carol graduated from Shaw High School and received a Bachelor of Music degree from Ohio Wesleyan University. She was active in many music groups as well as the Wesleyan Riding Club, Kappa Alpha Theta sorority, Mu Phi Epsilon, music honorary, and was one of the first Gleettes (a women’s glee club) in 1953.

She taught strings in Bellevue, Bedford, and Solon (all Ohio public schools). She directed church youth choirs at Bellevue Methodist, Pioneer Memorial Presbyterian in Solon, College Baptist in Hillsdale, Mich. and Solon United Methodist Church. Over the years, Carol was an assistant professor of music at Adrian College and played string bass with the Shaker Symphony, the Adrian Community Orchestra, the Hillsdale Community Orchestra, the Cleveland Women’s Symphony and the Chagrin Valley Orchestra. She was a Welcome Wagon Hostess while living in Hillsdale, Mich., and taught swimming lessons to children and adults for many years.

After retiring from teaching music and moving to Lakeside, she became active at Lakeside United Methodist Church in the Chancel Choir, string quartet (violin or viola), the hand bell choir, recorder consort, Circle, Stephen Ministry and outreach missions. For many years she led the annual Apple Dumpling Project to benefit missions. Carol was an alto vocal soloist in different churches and sang in the Lakeside Chautauqua Choir, the Port Clinton Community Choir, and the Lakeside Chorale. She is a past member of the Otterbein Marblehead Senior Life Community board of directors and a past president of Keystone Fellowship, the Lakeside Women’s Club, and the Lakeside Noonday Club. She could often be found fishing from the Lakeside dock and enjoyed helping children learn to fish quietly and develop patience. She loved antiquing (and going to garage and estate sales) with friends.

Carol and her husband Jack had a large loving family. One of their favorite family traditions was gathering over July 4th weekend each year at Lakeside to celebrate and sing together. Carol was the wife of the late John E. (Jack) Everson (high school/college/church choral director). They were married for 49 years before his death in 2004. She is survived by three sons; John (Margaret) of Liberty Center, Mark (Kim) of Ridge Manor, Fla., and Kurt (Jill) of Grand Rapids, 16 grandchildren, 23 great grandchildren and extended family; Judy (Sam) Huffman of Ravenna. Her brother was the late Dr. Charles E. Inman of San Diego, Cali. and her sister, the late Ann Exum, resided in Knoxville, Tenn.

Family and friends are invited to a visitation on Sunday, August 7, from 4 to 7 p.m. at Lakeside United Methodist Church, 450 Central Ave, Lakeside, OH 43440. A memorial service in honor of Carol will take place on Monday, August 8, at 11 a.m. at Lakeside United Methodist Church. A fellowship luncheon will be held immediately following the service.

Arrangements are provided by Neidecker, Crosser & Priesman Funeral Home & Cremation Service, Peninsula Chapel. Carol’s family would like to thank the wonderful staff at Elizabeth Scott Community (ESC) in Maumee, OH for three and a half years of tender, compassionate and excellent care and for blessing her with dignity and purpose as part of the ESC ‘family’. They also extend sincere thanks to Hospice of Northwest Ohio who blessed Carol with comfort, empathy and support during her last days on earth. Memorial contributions in Carol’s memory can be made to Lakeside United Methodist Church, Otterbein Marblehead Senior Life Community or Lakeside Chautauqua Foundation. Online condolences may be shared with the family at www.neideckercrosserpriesman.com.