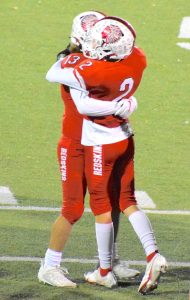 Redskins defensive back Cashes Jackson (13) celebrates making a diving interception to get Port Clinton the ball back late in the game against the Perkins Pirates. It allowed the ‘Skins to score the winning touchdown by Garrett Cornell in the closing seconds of the victory. (Photo by Kira Lucero)

It’s no surprise that Cashes Jackson came up with a big play when his team needed it most.

The Port Clinton senior intercepted Perkins quarterback Logan Lesch with 7:58 to play and the Redskins trailing by one point in their 19-14 win over the Pirates in a Division IV regional semifinal, helping to key the Port Clinton victory.

Now, the ‘Skins find themselves within one spot of the state semifinals.

On the interception, Jackson dove to make the grab just in front of the Redskin bench at the Port Clinton 41-yard-line, and with it, the momentum swung in the ‘Skins’ favor. Port Clinton responded by driving 59 yards in 12 plays, scoring on a 1-yard run by Garrett Cornell with 2:40 remaining. On fourth-and-inches from the Perkins 2, Cam Gillum had a 1-yard run on a quarterback sneak, setting things up for Cornell’s touchdown.

Had it not been for Jackson’s interception, the ‘Skins likely would’ve been pinned back deep and been forced to drive the length of the field to score.

It was Jackson’s fourth interception of the season, two of which he has returned for touchdowns.

“It’s my coaches and teammates. They believe in me and they’ve pushed me to get better every single day,” he said. “Without them, I wouldn’t be making the plays I do.”

Port Clinton coach Beau Carmon talked about what Jackson brings to the table.

“Playing corner is the second-toughest position to play in football. It requires a tremendous amount of skill, but also confidence,” he said. “That interception is a result of a three-year starter who has built both during his career. It changed the momentum and won the game for us.

“He seems to respond while on big stages. It says more about him as a person than it does as a player. He clearly thrives when he is needed most. This is the strongest secondary since I’ve been here because of the continued development of guys like Cashes and Anthony Aukerman. It’s what you expect from multi-year starters.

The ‘Skins did a good job of holding Perkins’ star receiver, Jayden Rowe, in check. He caught one touchdown pass, but was otherwise a non-factor.

“We knew they were going to try to get him the ball deep, and we practiced that all week,” said Jackson. “We got a great look from our scout team. We had Tyler Webb on him, and we knew he could stop Rowe.”

Jackson teamed with his fellow secondary mates to keep the Pirates from scoring on their final possession, which ended with three consecutive incompletions following a sack.

“It was great for us because we were so close earlier in the season to beating Perkins, but fell short. But this time, there was a lot on the line and we came to play,” he said. “It was a hard-fought game, we knew it was gonna be that way, and we came out with the win, which was a great feeling.

“I’m very proud of my team for what we’ve accomplished this season, and we couldn’t have done it without any of our coaches and the community supporting us all year.”