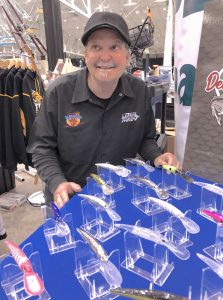 Here we are, back again for another year of bringing you up to date on the local fishing with the Beacon Fishing Report. We have plenty of tips on where to catch walleye and more as the Western Lake Erie walleye season begins.

The fish have definitely been biting. Jiggers are jigging them up and trollers are trolling them up. Limit catches from the world’s best walleye fishing waters are already filling coolers.

I want to remind everyone that on Saturday, April 16, Bay’s Edge Bait & Tackle in Port Clinton will be teaming with Tournament Director Jason Fischer’s Lake Erie Walleye Trail to host the LEWT Cast & Jig Open. The inaugural casting-only walleye tournament should be a hit with traditional walleye anglers who cast lead-head jigs, worm harnesses or blade baits.

No trolling is allowed. It should be an exciting time. For entry and tournament information, visit lakeeriewalleyetrail.com.

Anglers can sign in at Bay’s Edge tent in its spacious parking lot from 5-7 a.m. on April 16, and watch the weigh-ins from 2:30-3:45 p.m. Invite family and friends for the post-tournament party.

The 2022 fishing season is already off to a great start. Anglers who are jigging the rocky limestone reefs for walleye have been having luck off the beach west of Port Clinton, and now the walleye have been biting around the Niagara Reef complex along the deeper edges. Even though the open lake walleye spawning season is still a little ways off, we are beginning to see some pre-spawn fish.

Fisherman’s Wharf, which has party fishing boats docked in downtown Port Clinton, has reported limit catches this week, as have the six-pack charter boats. Most of the fish that we are seeing are two- to five-pound males, and the heftier females should not be far behind.

Trollers have been staying inside D Can along the Lake Erie Firing Zone on an angle towards Clinton Reef. The best lure of choice have been Bandit diving plugs, or crank baits, that we are setting back 40 to 60 feet while not using any weights. The walleye have been more active at trolling speeds of 1.6 to 1.7 miles per hour.

This week’s warming weather has helped to create an absolutely great start to this season. We can’t wait to get out there to get them gators!

Until next week, remember to have fun, be courteous and as always keep a tight line!