Retired U.S. Air Force pilot Dr. John Davenport and his wife, Dr. Diana Kyrkos, of Catawba Island, will spearhead a local medical team heading to Guatemala this spring to help disadvantaged Mayan villagers. But first, Davenport will be entertaining friends and neighbors to help purchase medical supplies and pay for the adventure.

“The Mayans and their history-rich culture are on the verge of extinction with little or no support from the Guatemala government,” explained Davenport, a singer, songwriter and musician who performs at Put-in-Bay, Lakeside and is a regular on Main Street Port Clinton’s free concerts on Friday nights on the banks of the Portage River in downtown Port Clinton.

“This is the third year my wife and I will be making the 13-day Guatemala trip,” said Davenport. “We’ll be part of a 23-person team that will be there March 30 through April 10, and we’ll be taking antibiotics, pain medications, birthing kits, eye glasses and other medications that help keep the Mayan villagers in their mountain villages sustained for another year.”

Before team members can go, they anticipate a need for more than $10,000 in medications this year. Team members also pay their own travel expenses and raise funds for medical supplies.

For Davenport, that is an excuse for a fund-raising concert on Friday, Feb. 22 at his concert venue HALO Live at 805 Wayne St., Sandusky. Davenport co-owns The Mohawk Studio there with founder Shawn Daley, repurposing a 104-year-old old stone church into “one of the coolest places you could ever enjoy a concert,” said Davenport. “We’ve outfitted the concert hall with a 5,000-watt sound system, smoke generator and light show. The venue can accommodate 175 music fans.”

Tagging the concert “An Evening with the Songwriters!” the doors open at 7 p.m. Davenport will also be featuring his famous turkey chili and cornbread, as well as refreshments.

“The local songwriters performing,” said Davenport, “will provide a round-robin display of entertainment. Rather than charge admission, donations can be made at the door. There will be two groups of four singers, with each group taking a turn onstage to offer a variety of original songs.

Davenport is president-elect of the Kiwanis Club of Port Clinton, on the Fundraising Board for the Island Safe Harbor Animal Sanctuary and a mentor in the TNT mentoring program in Ottawa County. 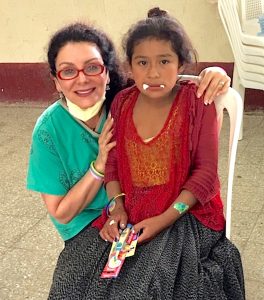 Dr. Diana Kyrkos of Catawba Island comforts a young Mayan patient after performing much-needed dental work during her 13-day medical mission in 2018 to rural Guatemala with group of volunteers from Northern Ohio.