The four-wheel-drive bus ground to a halt at the base of a very steep grade. This was the end of the line for the 25 medical missionaries who were visiting a Mayan village deep in the mountains of Guatemala.

For the remainder of the day’s journey, the team had to trudge up and down steep hills on foot for another half of a mile. Making the trek even more arduous was the fact that two of the medical team suffered from Multiple Sclerosis. Another was more than 80 years old. Many of the medical bags weighed in excess of 50 pounds, making for a mighty challenge just to haul their the bags and baggage — and medical equipment — to the village.

Once in the village, our team went to work setting up triage stations and preparing to offer medical attention in a number of clinics, including dentistry, vision, gynecology, pediatrics, and general medicine. All of this was prepared in advance by a small group of eight Christians from Guatemala (Fundenor led by Williams Picon) who are dedicated to helping these villagers survive in a country that considers the rural natives expendable.

This was the third medical mission trip for us.

My wife, Dr. Diana Kyrkos, a pediatric dentist in Bay Village, and I are  from Catawba. As members of the medical missionary team sponsored by the John Knox Presbyterian Church in North Olmsted, Ohio, we paid our own expenses while simultaneously helping the team to raise more than $10,000 for medicine and supplies. I raised money by hosting a songwriter’s event at my concert venue, HALO Live in Sandusky, while Diana raised money through a donation yoga event at Soul Stretch Yoga, owned by her dear friend Rose Sabin.

Our team left Cleveland on March 30 and returned on April 8. After landing in Guatemala City, the team endured a 7-hour bus ride north into the mountainous interior of the country near Coban and Tactic. The team visited four separate villages in five days, staying two days in one village because of the number of villagers that needed to be treated.

Fundenor manages these trips as a hand up, not a hand out. Villages must qualify for medical attention by attending meetings and learning methods for improving their lives. Fundenor teaches the Mayans methods for better sanitation, diet, farming, cooking, personal hygiene, and much more.

After five meetings, Fundenor agrees to provide medical attention or to build schools and clinics. Through this self-help philosophy, the villagers educate themselves on ways to improve their livers, and the lives of their children and other family members.

Mayan girls are traditionally expected to care for younger siblings and usually get married by age 15. To help reverse this trend, Diana and others raised money for scholarships that would send 11 young girls to secondary schools to get an education, improving their chances of returning to their villages and making a bigger difference.

My wife and I also helped sponsor three deaf-mute children from one Mayan family to attend a special-needs school to learn sign language. I often tell people that team members are often changed more by these trips than the villagers themselves. Treating those in dire need of help reminds each team member that giving to others is more important than the material things we tend to take for granted each day. 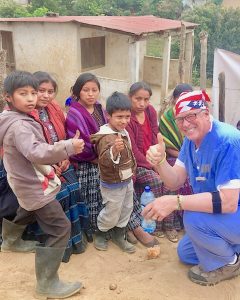 Dr. John Davenport enjoyed spending his rare down time on a medical mission to the wilds of Guatemala with at-risk children in the village.