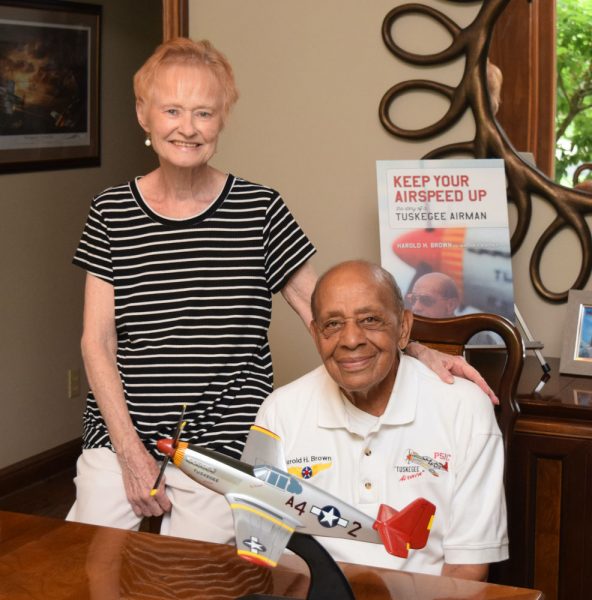 Famed Tuskegee Airman Harold Brown and his wife, Marsha Bordner, will be getting their second and final vaccination for Covid-19 next week at Magruder Hospital. The couple have been proponents of everyone getting vaccinated as soon as possible to stop the spread the the pandemic. (Photo by D’Arcy Patrick Egan)

Famed Tuskegee Airman Harold Brown and his wife, Marsha Bordner, of Catawba Island will happily check in at Magruder hospital on Monday, Feb. 22 to get vaccinated for Covid-19 for the second and final time. They are also adamant that when it’s your turn, you should follow suit.

At 96, Brown often is on book tours for “Keep Your Airspeed Up, the Story of a Tuskegee Airman,” that he wrote in conjunction with his wife, a retired college president after almost a decade at Terra State Community College. They are a surprisingly lively couple, and concerned that many people are deciding to hold off on the vaccination.

“I tell everyone the same darned thing,” said Brown, one of the last remaining Tuskegee Airman fighter pilots of World War II, and a prisoner of war after being shot down over Germany.

“If you want to be around to see your next birthday, you better get yourself vaccinated.”

Brown has become a national spokesman for the vaccinations after the couple received their first shots at Magruder Hospital a few weeks ago. They know that many Blacks in America don’t trust the American medical system, and have resisted vaccination.

“Black people had been treated unfairly by the medical system in America many decades ago,” said Brown. “It doesn’t happen any more, but that institutional racism has been passed down over the generations.

“There is a lot if distrust, but everyone should should now make sure of being vaccinated right now. If the many thousands of other folks have been getting the shots, and nothing is happening to them, make sure you get yours, too.”

Brown firmly believes he’s just a regular guy, despite his long military service and honors, a reason why his talks and books have been so popular.

“I’m just an Average Joe walking down the street, but if people read in the newspapers about me getting the vaccine, it gives me the chance to express my opinion that it is the right thing for them to do, as well,” he said. “The people at Magruder Hospital have been great. They’re well-organized and ready to roll when people arrive for vaccinations.”

After the couple received their first vaccinations, television stations and newspapers took note.

“We had family in Georgia who read about it in USA Today,” said Bordner, with a laugh. “We know there are people who think Covid-19 is a hoax, but how many people have to die before you get your head on straight? Older people are especially vulnerable.”

More than 80 percent of Covid-19 deaths in the U.S. have been senior citizens, and a third are men and women who were 85 or older.

Brown and Bordner are quite unique, being still very active despite their age. They travel the country to speak to groups of school children and at book signings. Both lament that knee problems have limited their golf and bicycling in the Catawba Island neighborhood, and they are seeing specialists to return to their more active lifestyle.

“Get vaccinated is easy,” emphasized Brown. “You hardly feel the needle, it only takes a few minutes, and you’re safe from the virus. How can you beat a deal like that?”