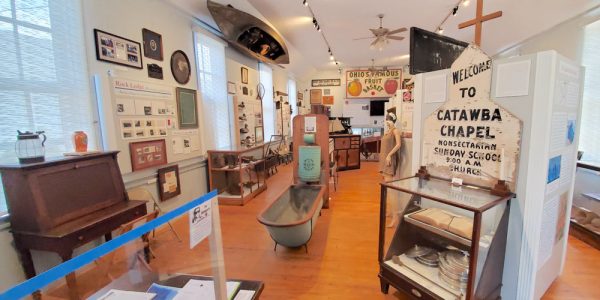 The Catawba Museum at Union Chapel has made significant advances in museum acquisitions and members since the pandemic of 2020.

The 2022 membership campaign for new and renewed membership in the Catawba Island Historical Society (CIHS) has begun. Annual membership dues are a major source of the funds used to operate the Society’s Catawba Museum at Union Chapel and sponsor its biannual Cultural Speakers Program.

The organization’s activities bounced back significantly after being severely curtailed by the Covid-19 crisis in 2020. The Museum’s mid-May to mid-October operating season saw an increase to 843 visitors in 2021, up 53% from last year. It also began their speaker’s program again with a presentation last month about U.S. President Rutherford B. Hayes. Nearly 100 people attended.

“We remain vigilant,” said CIHS President, Craig Koerpel. “Never-the-less, we are hopeful the worst of the pandemic is behind us and look forward to doing an even bigger and better job in 2022.”

Plans have been made to generally embellish and enhance the Museum’s “Timeline Tale of Catawba” theme. At least two totally new exhibits will be mounted. One will highlight the creation of our west beach communities; Byrneal, Kenykirk and Orchard. The other will recount the birth and demise of the area’s commercial fishing industry.

It is also likely that the Historical Society’s lecture series will include additional events next season. There would be one in the spring and one in the fall.

“Our Board made a policy decision not to charge admission for either the Museum or the speaker presentations,” said Koerpel. “We did not want to build a financial barrier between people and their history. The Historical Society depends heavily instead upon membership dues for its operating income. With continued support from the community, we are confident we can continue our mission of preserving and protecting the heritage of Catawba Island.”

The museum is in the iconic 1888 Union Chapel on E. Porter Street at the north end of Catawba Island. It began operating in 2018. A year earlier, CIHS launched its series of speakers about historical subjects. Examples have ranged from the lives and customs of local Native Americans, to this area’s response to Prohibition, and to the geology of Lake Erie’s Western Basin.

Two levels of annual Historical Society membership are available: The Historian at $25 and the Curator at $100 per year. A lifetime subscription to the Society’s Council of Nabagon can also be acquired for a one-time investment of $1,000. More information can be obtained by calling 419-967-5363 or visit www.catawbaislandhistoricalsociety.com.