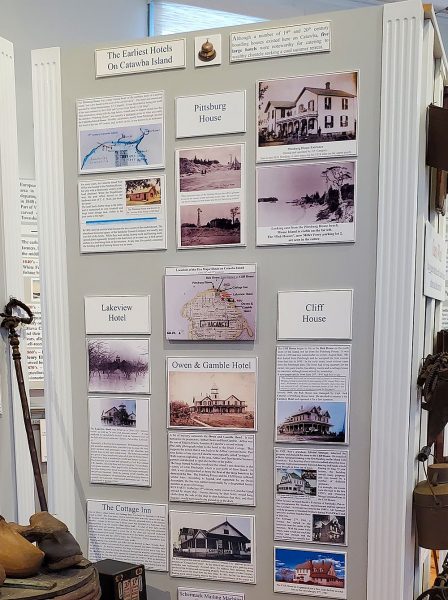 The “Era of Catawba’s Grand Hotels” display will be coming to the Union Chapel Museum of Catawba Island Historical Society in 2020.

“With solid support of the membership effort we will carry out some exciting new plans in 2020,” said Craig Koerpel, President of the Society. “Museum exhibits about Catawba’s era of grand hotels, and about some of the Island’s early pioneer families are being prepared. We will also be launching a Genealogy and Resource Library as we organize documents and photographs we have begun collecting.”

The museum is located in the iconic 1888 Union Chapel on E. Porter Street at the north end of Catawba Island. It began its annual May to October operation in 2018. A year earlier, however, the Historical Society started a series of speakers about historical subjects. Examples have ranged from the lives and customs of local Native Americans to this area’s response to Prohibition and the geology of Lake Erie’s Western Basin.

Koerpel explained that admission to both the Union Chapel Museum and Cultural Lectures is free because the Historical Society does not believe a financial barrier should exist between people and their past.

“We reached a target of 250 members in 2019. If we can meet or exceed that again in 2020, we can continue fulfilling our mission to protect and preserve the heritage of Catawba Island,” he said.

Two levels of annual Historical Society membership are available. The Historian membership is $25 and the Curator membership is $100 per year. A lifetime subscription to the Society’s Council of Nabagon is also available for a one-time investment of $1,000. For more information, call 419-967-5363 or visit catawbaislandhistoricalsociety.com

The museum will open its season on Saturday, May 16. It operates from 10 a.m.-4 p.m. on Monday, Wednesday and Thursday, and the second and fourth Saturday of each month until mid October.