The Catawba Island Historical Society has begun its 2019 drive for new and renewed memberships. Membership dues fund the Society’s Catawba Museum at Union Chapel and Cultural Lecture Series so both can be offered to the public without an admission charge.

The Historical Society began accepting memberships in late 2017. By the end of 2018, it had attracted nearly 200 members in three categories.  Half of those who joined became $1,000 Lifetime Members in a founder’s organization called the Council of Nabagon. The other half were split between annual memberships at the $100 Curator and $25 Historian levels.

The Society’s goal is to increase total 2019 membership by 25 percent.

The museum opened in mid-June last year. During an abbreviated first season its displays about the area’s Ice Harvesting Industry attracted 700 visitors. According to Historical Society Board member Dr. Richard Thomas, “Funds from expanding our membership base in 2019 will allow us to grow and diversify the coming year’s exhibits. That will generate more interest, attract more traffic, and provide more opportunities to share the Catawba story.”

Thomas, a partner in a Toledo general dental practice and a full-time Catawba resident since 2011, jokes that he was selected by fellow Historical Society Board members to oversee Museum design because he confessed to organizing a display of rocks and other natural wonders on his bedroom dresser at the age of 10!

“My task today is a bit more complex,” he says. “It is using increased membership funding to create a Timeline Tale of the areas geological birth, prehistoric and Native American people, pioneers, entrepreneurs and adventurers.  We are confident that members and guests alike will enjoy this broader perspective of how Catawba’s past, present and future are connected.”

More information about joining the Catawba Island Historical Society is available at www.catawbaislandhistoricalsociety.com. 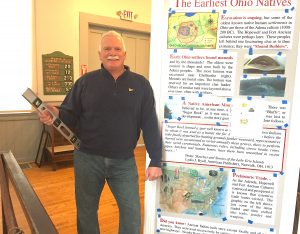