Catawba Island’s John Davenport goes to the dogs for Christmas

A former U.S. Air Force Command pilot and now a prolific singer and songwriter from Catawba Island, John Davenport loves the local stage. He isn’t in a quest for fame and fortune, but like most troubadours who tour area venues, tips find their way into his guitar case at his shows.

“I’m not really in the music business for the money,” said Davenport, showing his trademark wide smile. “So at the end of the season, I gift the money at Christmas time to the Safe Harbor Animal Sanctuary in Port Clinton, just across from the Port Clinton Airport.

Davenport had $504.22 in tips this year, and always had had a soft spot in his heart for Manager Nancy Benevento of the Island Safe Harbor Animal Sanctuary, a no-kill shelter where he is also a board member.

He made the donation in the name of Debra Mussachia, a friend who had wanted to be a volunteer at the animal shelter but died three months before it opened. Long ago, Mussachia had introduced Davenport to one of her best friends, Dr. Diana Kyrkos, who is now Davenport’s wife.

“Debra loved the concept of the animal sanctuary, and I wanted her to be remembered,” said Davenport, who challenged his friends and shelter board members to match his donation.

“Fred and Rit Tolliver graciously said they would, making the donation in the name of William (Bill) Kramer, a huge dog lover, allowing us to give $1,008.44 to Nancy Benevento,” said Davenport. “I knew it wasn’t an outlandish amount of money, but when Nancy shed a few tears, I knew it was an important donation for her and the sanctuary.”

While Davenport doesn’t push the crowd for tips at his shows, he always mentions that if they would like to leave a tip it will be going to the Island Safe Harbor Animal Sanctuary.

“When I tell folks the tips they leave behind are for the animals, I get 10 times more money,” he said, with a laugh.

Davenport is renovating a century-old church in Sandusky into a music recording studio, HALO LIVE. He has written more than 120 songs, and recorded a music CD at a studio in Nashville, Tenn. 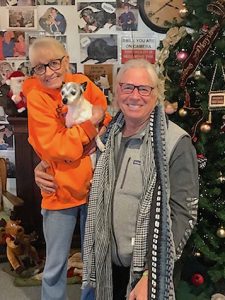 John Davenport donated the tips from his summer season of singing at local clubs and taverns to Manager Nancy Benevento of Island Safe Harbor Animal Sanctuary this week, who is holding one of her shelter pals, Griff.